Sign UpLogin
You are here: Home / Books / A Heart Enslaved 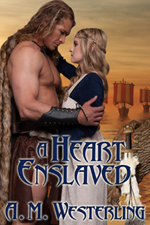 Banished from his homeland for a crime he didn’t commit, Thorvald Stronghawk knows selling the Frisian beauty he’s captured will bring him the blood money needed to regain his good name. When the man who accused Thorvald of the crime is the one buying Gisela, Thorvald must decide what he wants more: To recover his reputation among his fellow countrymen, or tame the woman who has vowed to hate him forever for destroying her home and family.

Gisela of Falkenstead realizes the handsome, self assured Viking views her as nothing more than chattel to be bought and sold rather than a woman with a life and mind of her own. Although her head tells her to escape the man she thinks is nothing more than a savage murderer, her heart has other ideas.

Will Gisela find a way to flee? Or will she find love and happiness in Thorvald’s arms?