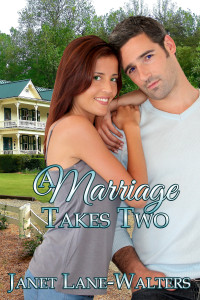 This is medieval.” That’s Carrie’s response to the reading of her grandfather’s will. The money will allow her to provide for her ill mother and give her the chance to give up one of her full time jobs as a nurse. The money won’t be hers until she marries. This creates a dilemma. She has no time for dating and doesn’t know who would marry her until she thinks of her former best friend, Tony. But can she ask him? Two months later time is running out and she decides to take the plunge.

Three years ago, Tony and his wife divorced. Last year he obtained custody or their child. When Carrie asks him to marry her he decides since this won’t be a real marriage, he can accept. Years ago, he loved Carrie but never said anything to her. Now burned, he doesn’t believe in love. To help her uncomplicate her life he agrees.

Can Tony and Carrie get past the reason for the marriage and find love and make a home for his son?