Sign UpLogin
You are here: Home / Books / A Winter Sabbatical 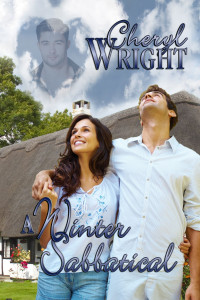 Marissa Temple, unable to come to terms with the death of her fiancé, needs time alone. Close friend Daniel offers the use of his quaint country cottage while he is overseas on a long term assignment. But Daniel forgot to mention his best mate, Travis Johnston.

The bed covers were pulled back ready for Marissa Temple to climb in.

She stared at them almost blankly, wanting so much to sleep. As she leaned forward her whole body began to shake. So she stood upright again, tears welling in her eyes.

She knew what would happen if she went to sleep; every night was the same – always the same.

Marissa saw herself walking along the footpath with Jeremy; they were so happy, so much in love.

They were to be married, to prove their love for each other.

They’re on their way home, holding hands as they always did, touching each other, feeling their love for one another. Marissa hears the birds singing and chirping, and tells Jeremy how happy she is, that she wishes they were already married.

Jeremy smiles – the smile that makes her feel warm inside – then picks a flower from the roadside, tucking it into her hair. He pulls her close against him.

His warmth makes her feel so good, so loved. And then he kisses her. Marissa knows there is no other man in the entire world for her – Jeremy is her Mr. Right, her knight in shining armor, the one and only love of her life.

She wraps her arms around his neck, and his hands slide to her waist. Oh, how she wishes they were already man and wife!

He lifts his hand to her face and brushes a wisp of hair back into place. Marissa closes her eyes, breathing in the smell of him, the essence of him and his whole being. She brushes her lips against his, gently kissing him. The tingling that starts in her lips flows all the way down to her toes.

As his arms encase her in his love, his warmth, and his adoration, she whispers in his ear. “I love you, Jeremy. So much. Maybe even too much.”

“Ditto,” he whispers back.

“Leave me alone!” she yells into the empty room, her heart-beat quickening as hot tears roll down her face.

She closes her eyes trying to block out the memory. But it won’t go away, won’t leave her alone, and her memories play out like a movie. One she watches over and over again.

“We have to go,” Jeremy says, looking deeply into her eyes, regret evident. They walk hand in hand to the pedestrian crossing.

There are no cars in sight, not a one, so together they walk out onto the road. They take a few steps, and that’s when she hears it; the roar of an engine and the squeal of brakes. Marissa feels Jeremy’s grasp tighten. She hears the thud, feels the impact. And hears Jeremy’s scream somewhere in the distance.

She sinks into a deep black void.

Marissa opened her eyes and shivered. Her heart was now racing so fast she felt as though she would faint. She was barely able to stand and was shaking violently.

She put her hand to her heart, willing it to slow, at the same time trying to control her breathing. She couldn’t chance hyperventilating yet again.

With an overwhelming emptiness, Marissa walked out into the lounge room in a daze.

Resigned to the fact that once again she wouldn’t sleep, she turned on the television, flicking through the channels.

Her head pounding relentlessly, Marissa weighed up her options. She couldn’t cope with a romance; too many memories of what she’d lost. Murder wasn’t an option either; how could she watch another person die? Comedy didn’t seem appropriate either.

Her mind wasn’t letting go, and her heart was hollow. “How could you do this to me?” she whispered to the empty room, knowing that Jeremy couldn’t hear, but wanting, needing him to answer. “I have to move on. Please, leave me alone.”

Marissa sobbed until she was completely wrung out, until there were no more tears. But the pain never left, it was always there — inside her, controlling her life.