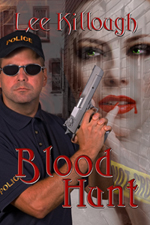 San Francisco Detective Garreth Mikaelian buries himself in his work to forget the death of his wife. For his present case, this is fatal. Unknown to him, the chief suspect, a fascinating red-haired woman, Lane Barber, is a vampire. When he gets too close and approaches her alone, off-duty, she attacks him and turns him into a vampire, too, then disappears from the city. Trying to hide what he has become, Garreth sets out to find and destroy her, no matter where in the world the chase takes him.

The Body in the Bay

The Body in the Bay

“I Ching says you need to be careful today, Mik-san.” From where he stood pouring himself a cup of coffee, Harry Takananda’s voice carried to Garreth above Homicide’s background noise of murmuring voices, ringing telephones, and tapping typewriters.

Squatted on his heels pawing through the bottom drawer of a file cabinet, Garreth nodded. “Right,” he said around the pencil in his mouth.

Harry added two lumps of sugar to the coffee. “But Lien says there is good fortune in acting according to duty.”

“Devoted to duty, that’s me, Harry-san.” Now, where the hell was that damned file?

Harry stared into the coffee, then added two more lumps of sugar before carrying the cup back to his desk. He sat down at the typewriter. The chair grunted in protest, bearing witness to how many times Harry had added those extra lumps over the years.

Rob Cohen, whose desk sat on the other side of a pillar from Harry’s, asked, “Do you really believe in that stuff?”

“My wife does.” Harry sipped his coffee, then hunched over the typewriter. “I went through the book once and found that of the sixty-four hexagrams, only half a dozen are outright downers. The odds are she’ll throw a positive hexagram most mornings, so, Inspector-san…” He steepled his fingers and bowed toward Cohen, voice rising into a singsong. “…if it give honorable wife peace of mind, this superior man should not object, you aglee?”

Cohen pursed his lips thoughtfully. “Maybe I should introduce my wife to I Ching, too.”

At the file cabinet, Garreth grinned.

The door of the lieutenant’s office opened. Lucas Serruto stepped out waving a memo sheet.

His dark, dapper good looks always made Garreth think of an actor cast to play a detective in a movie where the cop was the hero. Garreth envied the way Serruto made anything he wore appear expensive and custom-tailored. “Any volunteers to go look at a floater?”

Around the office, heads bent industriously over reports and typewriters.

Serruto surveyed the room for a minute, then shrugged. “Eenie, meenie, minie — Takananda, the Cicione killing is in the hands of the DA, isn’t it? That leaves you with just the bodega shooting.”

“Good. You and Mikaelian take the floater.” He handed Harry the memo. “The Coast Guard is waiting for you bayside.”

With a sigh, Harry gulped his coffee. Garreth shoved the file drawer closed and stood up.

They left, pulling on raincoats.

Driving out of the parking lot, Harry headed toward the Embarcadero. The city flowed past the car, muted by fog, swathed in it. The radio crackled and murmured, dispatching officers across the city. Foghorns hooted.

“Let’s try to get out at a reasonable time tonight, shall we?” Harry asked. “Lien wants to feed us supper before it mummifies keeping warm.”

“Us? You’re asking me over again?” Garreth shook his head. “Harry, I can’t keep eating your groceries. If nothing else, Lien’s cooking is changing my name to Girth Mikaelian.” He ruefully ran a thumb inside his snug belt.

“She’ll have my hide if I don’t bring you. Lacking a houseful of kids…” Harry’s smile did not hide an old regret in his voice. “…she has only you and her art class kids to mother. Don’t fight it.”

There had been weeks after his wife Marti’s death when only Lien kept him from being a basket case. Garreth owed her a great deal. “I’ll come.”

The car swung onto the Embarcadero. Harry hugged the wheel, as though leaning forward helped to see better. “Sometimes I wonder what it would be like living where there’s a real summer, and maybe even sunshine in August.”

“Come along the next time I go to Davis to visit my kid and find out.”

They turned in at the pier number on the memo and drove down to a barrier of vehicles. There they climbed out. Fog enveloped them, cold and damp. Garreth shoved his hands in his coat pockets and huddled deeper in the collar as he and Harry walked the rest of the way.

Near the end of the pier the usual post-violent-death circus had set up: uniformed officers, Crime Lab, Photo Lab, an ambulance crew from the medical examiner’s office along with an assistant ME, and this time, Coast Guard, too.

“Hi, Jim,” Harry said to one of the Coast Guard officers.

Jim Birkinshaw smiled. “Hell of a way to start a morning, Harry.”

Garreth moved as close to the body as possible without interfering with the photographer.

The victim had been stretched out on his back, but he still looked less than funeral-parlor neat. His rumpled coat had twisted up around his neck, and a spreading stain of salt water surrounded him.

Strange how you could always tell the dead ones, Garreth reflected. They looked different from living people, even different from someone unconscious. They lay awkwardly, slack, collapsed into postures no vital body would assume.

He pulled out his notebook and began taking down a description of the corpse. White male, brown hair of medium length, 170 to 180 pounds. Five ten? Garreth found estimation difficult in a horizontal position. Red suit coat with black velvet collar and lapels, black trousers, black boots with inseam zippers. Evening wear. Garreth moved around the outside of the group at work to look at the face for an age determination.

Birkinshaw said, “I don’t think he’d been in the water long. The pilot of the Alcatraz excursion boat spotted the coat on his first run out this morning.”

Harry shook his head. “A wonderful treat for the tourists.”

Garreth jotted down the discovery details, then wrote a dollar sign. Even wet, the clothes retained a quiet elegance. That kind of understatement came with a high price tag. The carefully manicured nails on the out flung gray hands matched the clothing.

The photographer stepped back, giving way to the assistant ME, Catherine Ho. In the course of examining the dead man, she pulled loose the twisted coat. Garreth caught his breath, a gasp echoed by others around him. The action rolled the dead man’s head and exposed a gaping wound in the throat, a slash stretching from ear to ear and so deep that spine showed.

Deadpan, Birkinshaw said, “Almost took his head clear off. Looks like his neck’s broken, too.”

Garreth grimaced. Birkinshaw had known…had been waiting gleefully for the moment the rest of them discovered it. Garreth knelt down beside the corpse and studied the face with its half-open eyes. Age, midthirties, he wrote. Eyes, blue. The face showed care, too…closely shaved, sideburns and mustache trimmed.

He stopped writing, staring at the dead man’s neck…not at the puckered gray edges of the wound, but at a mark below it to one side of the adams apple, almost black on the pale skin and about the size of a silver dollar. A feeling of deja vu touched him.

The mark caught the attention of others, too. Birkinshaw nudged Harry. “Maybe he was on his way home from a heavy date when he was attacked. That’s the biggest hickey I’ve ever seen.”

Not a hickey, Garreth thought. He made a few as an adolescent and they never looked like this. It reminded him more of the marks he saw on people’s arms from subcutaneous hemorrhage left by a lab tech’s poor venous stick. “What can you tell us?” he asked Ho.

She stood up. “I’d say he died between six and nine hours ago. Cause of death seems obvious. It probably happened without warning. There’s no indication of a struggle. No defensive wounds on the hands or arms. The wound is a single continuous incision. From the depth, someone of considerable strength inflicted it. Do you want us to call you when we’re ready to start the autopsy?”

“Please,” Harry said. “All right, Mik-san, let’s see what he can tell us about himself.”

Kneeling beside the body, Harry and Garreth searched it. The hands were bare, but pale skin on the left third finger and right wrist indicated the removal of a ring and watch. Married, Garreth thought. Left-handed.

In the coat they found a handkerchief, not monogrammed, and a half-empty pack of sodden cigarettes along with a disposable butane lighter. Nothing helpful, like matchbooks that might tell them where he had been.

The items went into a property envelope.

No billfold in the hip pockets of his trousers. Nothing in the left front pocket, either.

“Why break his neck on top of cutting his throat?” Garreth dug into the last trouser pocket. His fingers touched something. “Cross your fingers and hope we’re lucky, Harry.”

He turned the pocket inside out to remove the object without touching it, on the off chance that the killer might have touched it, too, and left a fingerprint. A room key for the Westin San Francisco fell into the clear plastic envelope a Crime Lab man held out.

Harry took the envelope. “Overlooked by our killer, you think?”

“Maybe he was interrupted before he could finish searching the pockets,” Garreth said.

Harry murmured noncommittally then looked up at the Coast Guard officer. “Jim, will you check the bay charts and see if you can give us an idea where our boy here went into the water?”

The ambulance attendants zipped the dead man into a plastic bag and loaded him on a stretcher. Thinking about the bruise, Garreth watched them lift the stretcher into the ambulance.

Where had he seen a mark like that before?

He asked Harry about it on the way back to the car.

Harry frowned. “I don’t remember a case of ours like that.”

“It wasn’t our case, I’m sure.” But he had still seen that mark, and heard someone else making a snide remark about a super-hickey. He wished he remembered more.