Sign UpLogin
You are here: Home / Books / For the Love of Faith

For the Love of Faith 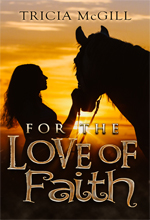 At almost seventeen Faith Boswell knows little about the world beyond the lodging house in Ballarat owned by her widowed mother. The mining town of Ballarat in 1860 is populated by those seeking to get rich by finding gold, so their residents are mostly miners on their way to the diggings with high hopes of finding this highly treasured substance. Sadly, Faith’s Ma is not the easiest person to get along with and Faith often wonders just why her mother is so bitter.

Things start to change unexpectedly one day when a stranger appears at the door of their home—a gentleman who mysteriously seems to know a lot about Faith’s Ma, her past life, plus Faith herself. Faith fears that her mother has been lying to her all her life. From that day Faith’s life takes a turn, perhaps for the better. One long-term lodger is a widow who unexpectedly presents Faith with an unusual birthday gift. This gift causes uproar which plays a large part in Faith’s life from them onwards.

Because Faith knows little about life outside of her sheltered existence, she is unable to fathom if handsome Walter Finch, son of the nearby store owners, has real feelings for her or is simply being kind. Faith is soon to find out just how willing he is to help her as she sets out on a new and scary phase in her life.

Faith quickened her pace as she neared the store, her Ma’s list clutched in her hand. This visit had become the highlight of her week, for the anticipation reached a level she could not understand. She sincerely hoped that the owner’s son, one Walter Finch would be working behind the counter. The store contained everything from cooking ingredients for the women, to shovels and hats for the men working out at the diggings, and had taken on a new pleasure in the past few months. She was at a loss to understand quite why this should be.

Previously Walt had barely passed the time of day with her until one morning as she handed her list over to George Finch, his son had come out of the back room, wiping his hands on a scrap of rag. “Finished out there, boy?” his father asked and with a nod Walt came towards Faith and smiled—and her heart was lost as he asked after her welfare and made some comment on her appearance that completely took her aback. Until that morning, no lad of similar age had shown the slightest interest in her and certainly not in her state of health.

Suddenly the one who now seemed to fill her thoughts far too often was striding towards her. Too late to step from the firmer path that had been laid down in front of the shops to protect the boots of the ladies, and to head across the street. Probably best, as after the heavy October rain overnight her only boots would soon be mud spattered, giving her Ma something new to complain about. Spare money for clothing was scarce these days according to her Ma, so these boots would need to last a few more winters.

Nothing for it now but to come face to face with him. She pulled the brim of her bonnet low over her face in an effort to cover the blush she knew was rising. Would she ever get used to the horrors attached to having a skin that her mother often likened to oatmeal? Her Ma put it down to her English background, and one of her main aims in life was to ensure that Faith kept her complexion from becoming shrivelled by the often-blazing sunshine before she reached full maturity. Her Ma had a thousand rules she lived by, far too many for Faith to keep up with at times.

Already Walter Finch was heading unerringly it seemed straight to her, so there was no escape. “Good day to you Mistress Boswell,” he said with a distinct chuckle in his voice to prove that once again he was likely set on teasing her.

“Good morning, Mister Finch,” she mumbled, side stepping to dodge his nearness. Of course, as always, he was out to confuse her by standing far too close for what good manners dictated. Often Faith considered these rules of etiquette so out of place in this land that abounded with scoundrels, hard-working miners, and bushrangers. Not that she ever had been confronted by a bushranger—but according to her Ma’s reasoning, just because she had never come across one did not mean they were not out there waiting to rob, or worse, ravish every female they met.

“You are looking particularly fetching on this dull old day, I must say, and a sight for these sore eyes.” Doffing his wide-brimmed hat Walt added a small bow, as if he was some gentleman of high breeding. According to Faith’s Ma, Walt, his father George, plus his mother Daisy, were living a pretense. Just because they owned one of the most important establishments in town—a shop that included just about everything needed by most inhabitants of the area, did not give them the right to think they were aristocracy or at least above their station in life according to her Ma.

Rather, Gertrude insisted they were no better than she was, just lower-class folk trying to earn an honest living. Faith often wondered just why, if that was her Ma’s opinion, she put on false airs and graces herself. Not that Faith would have the temerity to ask her Ma such. Faith knew Walt’s sister Florrie well, for she was of similar age and a likeable girl. Faith had also met their Mama, Daisy, and thought her kind and loving towards her family and always polite to their customers. Faith could not understand her own Ma’s reasoning. Although she insisted they were lower class, her set of rules at times commanded Faith behave as if she was a countess or of some higher rank.

“A small birdie told me that someone is nearing a special birthday. Seventeen is an age for rejoicing.” With a devilish grin, Walt bowed again, sending a lock of his thick dark hair across his forehead. As he straightened, he flicked this back carelessly.

“How so? It is just another number—nothing at all to rejoice about,” she remarked pertly, although inside she did feel that this birthday was rather special indeed. A few of the girls of similar age around the town and diggings were already wed or planning to wed their beaus by the time they reached her age. Mind you, by her Ma’s reasoning a lot of them wed for reasons of convenience rather than affection.

“By that I presume that your mother has no plans for a big celebration for her only daughter.” Faith could not be certain, but thought she heard a touch of disdain in that statement. “Florrie has been enjoying parties most of her life and our Ma would not dream of letting such an important occasion go by without at least inviting a clutch of her friends to celebrate along with her. It was she who told me that she was waiting on an invitation to your festivities.”

Faith chewed on her fingertip, unsure how to answer him. In fact, he knew that Faith had been one of the friends invited to Florrie’s sixteenth birthday celebration last year. It was on that afternoon when Walt had first seemed to realise Faith was not a silly child anymore. At the time, Faith had become confused and flummoxed by his attentions while inside she felt as if a hundred butterflies fluttered there. Because she had never attended school, as her Ma had been her only teacher, there had not been a lot of chance to mix with many of her own age, boy or girl. It had pleased her no end when Florrie befriended her after meeting her at the store one day. She did learn that day that Walt was about three years her senior, and to Faith he seemed to possess more self-assurance than she ever would.

“Ma is too busy with the many chores the lodging house demands of her to worry about celebrating the passing of a year of her daughter’s life.” Even as she said the words, Faith knew that nonetheless inside it did hurt.

“How is it that your Ma has no husband to assist her?” He put a hand on Faith’s arm as he rushed to add, “I apologise if that is too impertinent a question. But most women who arrive here in the diggings follow their menfolk, few come alone.”

“I thought it was common knowledge that my Pa died after coming here and setting up the lodging house—about three years ago.” It shamed Faith but truth was, her Pa died in a fight with a miner over a gambling debt. She never found out the whole truth as her Ma refused to talk about it—likely because she too was ashamed to admit she had married a gambling man who drank to excess.

Pa had never favoured Faith with a lot of attention, and although she knew her parents did argue a lot behind the door of their bedroom, he had never been unkind to her. As far as she knew he was not a brute of a man, but she felt that somehow her Ma did not grieve excessively over his passing. As luck would have it, she knew how to run the business, so managed adequately without him around.

Although his statement sounded genuine, deep-down Faith had a suspicion that he already knew what fate befell her Pa. “I have to get on,” she said as she waved a hand.

“I do hope I haven’t upset you.” He did seem perturbed, but as Faith knew little about boys, there was a chance he was perhaps chiding her.

“My Mama will be wondering where I am if I linger too long.”

“Perhaps we will bump into each other later. I just have a small errand to run for my Pa and will then head back to the store. I presume that is where you are headed.” He nodded at the list still clutched in her hand.