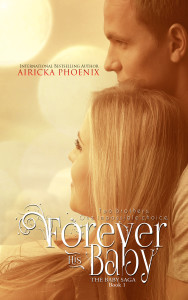 From the moment her suspicions are confirmed, Lily knows she’s screwed. What the hell is a nineteen year old with no future going to do with a baby? She can barely take care of herself. She needs help.

In walks Sloan McClain, the only man Lily has ever truly wanted — and the brother of the boy whose baby she’s carrying. While Lily expects a great number of outcomes when she tells Sloan her news, him proposing marriage and asking her to keep the baby is not one of them, especially not when she has every intention of giving the baby a better future by giving it the home she can’t.

Having spent the majority of his life protecting his brother from the bone-breaking fists of their father, Sloan is no stranger to hardship, loss and abandonment. He has learned long ago never to rely on anyone to take care of what was his, and that baby is his. He isn’t about to let Lily give away his family, nor can he allow that child to destroy the future he has built for Cole. His only option: marry the mother and claim the baby as his.

But no secret ever stays hidden forever.