Sign UpLogin
You are here: Home / Books / Forever Mine 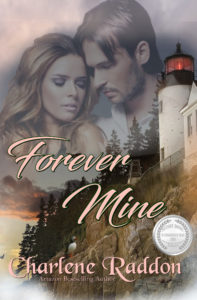 A mail-order bride from Cincinnati, Ariah Scott had traveled all the way to Oregon to marry one man…only to lose her heart to another in this steamy romance. What would become of her now? Ever since her father died at the hands of a vengeful relative, Ariah’s life had been shadowed by dark secrets. And now her forbidden desire for Bartholomew Noon filled her with uncertainty—and a secret longing that could never be fulfilled.
From the moment Bartholomew Noon saw Ariah standing alone in the Portland Station, the keeper of the Cape Meares Light was lost. Hopelessly in love with this angelic beauty who was fated to live beside him at the isolated lighthouse as another man’s wife, Bartholomew never dreamed that destiny would someday bring them together. Would Ariah truly be the woman he could cherish…forever?

Hester blanched, then colored. In her best imitation of refined gentility, which she usually saved for company, she said, “How dare you accuse me of drinking alcoholic beverages? You know I am a member in good standing of The Tillamook Women for Temperance Coalition…even if you have buried me here where I can’t get to the meetings anymore.”

Her husband tossed her a look of disgust, saying nothing about the bottle of Dr. Hamilton’s Heavenly Elixir he had found that morning under the porch steps. The so-called tonic was mostly alcohol, but Hester had ignored his demand that she destroy her supply. She claimed it gave her strength and made her feel better. Bartholomew no longer cared. It made her easier to live with, if nothing else.
“Yes, Hester. Now get the blankets, please, I haven’t time to argue.”
“Get them yourself then. You can move faster than me.”