Sign UpLogin
You are here: Home / Books / “Getting There” by Jacob King

“Getting There” by Jacob King 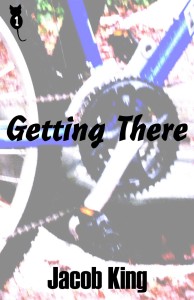 Jacob King is a wanna-be super-hero who met the loves of his life while teaching at Timken Senior High School in Canton, Ohio. His affections belong first to his beautiful wife, Carla Thompson, and then to his rewarding obsession to write and teach others to do the same. Carla gave Jacob the opportunity to be a father with the addition of his step-son, Furious, and his infant son, Atticus Rage, who both grow too fast for their parents’ liking. Working part-time at Phoenix Coffee in Cleveland provides Jacob with just enough caffeine to fuel his studies and other obligations as a Graduate Assistant at John Carroll University. When he’s not teaching, writing, studying, or changing poopy diapers, Jacob enjoys drinking micro-brewed beer, being visually impaired, and sleeping.

“Jacob King’s poems are a refinery. He takes the daily grind of urban midwest life – rides on the city bus, bicycle commutes, daily family challenges – and applies heat and pressure to reveal tiny diamonds, scraps of love amid the grit and dust. These poems take us along on Jacob’s personal journey, reminding us to always seek the sublime within the struggle.”  — T.M. Göttl, author “Stretching the Window,” “Angels and Copper”

“Pablo Neruda would have called King ‘fully engaged,’ for he is aware of the world around him, whether he is walking or biking or just watching. He notes how neighbors, after shoveling snow, share the sidewalk and ‘stand, / belonging,’ yet can be divided by culture, by ‘much more / than the burqa fabric / and tattoo ink.’ King seeks to find places of ‘faith / reaching beyond racism,’ and he reaches out to the ‘hidden girls’ who too often feel ‘malice / born of their loneliness’ yet who could easily see themselves as ‘beautiful / if anyone bothered to tell them.’ In the end, we all want what Jacob King wants for his step-son: the ‘gift: to be loved like that.'”  — Robert Miltner, Professor of English: KSU Stark, author of “Hotel Utopia,” “Against the Simple”

“It’s a reintroduction and rejuvenation of poetry. King is a man who I have greatly respected since first walking into his classroom, and now with this book of wonderful poems, I respect him even more for continuing in his chosen art.”  — Tyler Swegheimer, poet, graduate of Timken Senior High School