Sign UpLogin
You are here: Home / Books / Guns For Angels by Viviana MacKade

Guns For Angels by Viviana MacKade 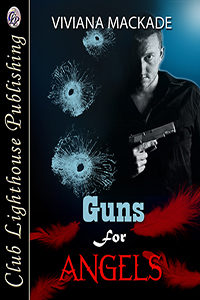 From a rich bedroom, a murder is ordered.

She had to die. Yoga instructor Ann Holloway’s sunny life is wrecked when a group of men break into her apartment and kill her sister. A rough, broody stranger snatches her from the killers’ jaw, but she has no clue about who these people were or the reasons behind the attack.

He was too scarred to really live. Burned-out former Marine and leader of the Team, Mark Carson thought he was doing a teammate an easy favor by picking up a couple of girls. How wrong. When his friend is killed, shadows build over the Team’s loyalty, and Ann’s life starts meaning more that his own, Mark is thrown into a different game. Now it’s personal.

From NY to sunny Miami, Ann and Mark run into a maze of lies, betrayal, and death, where love is the only, terrifying certainty.

And when truth unravels, they will risk all to survive.

ANN RAN FOR her life.

The gasp for air scratched her throat as she ran through the web of empty streets, through traffic lights that shone ruby. Footsteps echoed in her ears–close, too close–gripped inside her chest and twisted.

She dove into a dark alley, past trash bags that emitted the sickening stench of rotten food.

One, frantic thought dashed in her mind: do something. She was fast and fit, but her legs hurt, her chest burned. She kept going like a blind mouse; they would catch her.

Despair, so strong and alive, clenched her lungs and slowed her down as she realized she had nowhere to go. The City was an enemy of locked doors and dark corners.

A car came on fast from behind. Cutting the glassy night with a rumble, it stopped beside her.

Ann’s legs stopped, her heart stopped. It was over.

The driver seat window buzzed a few inches down and a voice ordered, “get in the car.”

Petrified, she stood still wheezing in the hot night.

The window rolled further down and his voice rose again, deadly calm. “Get in. Now.”

What could she do but obey? She saw the gleam of the gun in his hand, she would be dead within two steps if she ran. Her sister’s scream kept playing in her ears, along with the hiss of bullets she’d dodged. This time, this man was too close.

Ann dragged her heavy feet in the back seat as he took the car into the road.

She could still fight some, she thought, trying to hole up in the opposite corner of the seat. Was she supposed to kill the man, or at least try, because he wanted to kill her?

Funny thing was, if she attacked him she would die, either because he’d shoot her like a dog or because they’d hit a wall or something–fatal, at the speed they were driving. Not the best outcome in any case, but at least she would go down with dignity. Did she really care about that?

When she didn’t move, he shot her a glance from the rear-view mirror. Dark eyes were all she saw. “Get in the front seat,” he said. “I’m not gonna ask a third time.”

Ann’s shoulder hit hard the front seat when he slammed on the brakes. He turned around to face her. “Now, girl, I don’t know if you’re deaf or plain stupid, but if you want my help you do whatever I tell you to, and you do it quick. Understand?” The car peeled out down the road again, pushing her back once more. “Move!”

“Aw, shit, you’re stupid, ain’t you?” He puffed out a breath. “Okay, I thought it was clear, but let me break it down for you. Behind us? Bad guys trying to kill you. In this car? Good guy trying to keep you alive. Got it?”

“Why they want to kill you? Dunno, I guess it’s ’cause you don’t do what you’re told.”

Ann had such a bad, bad night. Her sister was missing, her peaceful, simple world shattered. “Now you listen, jackass!” She spat out from in between the front seats, resisting the urge to punch the side of his head. “I had what you might call an unpleasant evening so pick one: drop the attitude or leave me here.”

“Can’t. I’ll get fired, ’cause you’ll get killed. Although,” he added on a second thought, “nobody technically hired us, so…”

“Who are you? And if you want me to get in the front seat, for heaven’s sake, just ask. Gently.”

All sorts of weapons fired from his now murderous gaze, a striking contrast with the sweetness oozing from his voice. “Please, angel, can you join me in the front seat of this fucking car?”

Ann deemed it to be all the gentleness she could ask for and scrambled to his side.

The corner of his jaw clenched; the car speed increased accordingly. “Put the seat belt on,” he growled.

“I don’t trust you.” She had no clue on what was going on, but she wanted a quick way out if she came to need one.

He spared her a sideways glance and, for a short second, he looked amused. “I’m not one of those fuckers behind us. If I wanted you dead, angel, you’d be just that by now. Trust me on this one.”

She did trust him on his last statement and besides, if he wanted to kill her, what was the point of taking her away? To kill her in private? He didn’t seem too concerned about being subtle.

The seat belt clicked at her side. “That’s very comforting,” she said. “Thank you, ill-mannered stranger.”