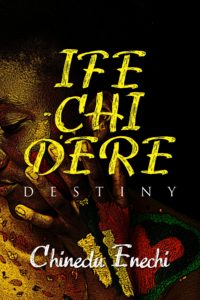 The loss of both her parents, even before she is old enough to speak, appears to pre-determine Ifechidere’s life. She is made to toil from dusk to dawn.

Yet, Ifechidere is no modern-day Cinderella, as she finds that faith in the will to survive, which is stronger than any absentee fairy godmother, will propel her to find herself. And it’ll lead her to the thing that was always meant to be …

The mourners wept even harder, when they looked at Obande’s children. Afoma, who was 15, had been the apple of her father’s eye. She was responsible, industrious and humane. Even during the times her mother maltreated Ifechi, Afoma got into trouble because she would always console Ifechi. Shortly after Ifechidere’s disappearance, Afoma had decided that she would become a lawyer in future, so that she would be able to fight more effectively for the less privileged. She also promised herself that she would look for Sister Ifechi and live with her.

Onukwube was now nearly 13; he was a different story. He was wild, rebellious and flagrantly irresponsible. Egged on by his mother’s pampering, he saw no reason to be any other way. Ogolo never allowed him to do chores in or around the house. She called him Onochie, insisting that males, especially those who were Onochie, were not supposed to any work. The house chores were therefore passed on to Afoma, as Ifechidere wasn’t there to do them. If Afoma was not around to do the work, their mother would do them.

Yet, Onukwube seemed to have a soft spot was his sister. It was either that, or he just loved any excuse to get into a fight. One day, their mother tried to punish Afoma because she dared to ask him to wash some plates. But he stood between his mother and sister, absolutely refusing to move and daring Ogolo to touch Afoma. On another day, Afoma returned from school, with her clothes in tatters. Onukwube was the only one at home. In tears, she said that a boy in her class, named Okenna, had fought with her. Onukwube went and sought out Okenna. Though Onukwube didn’t win the ensuing fight, he gave his opponent an unforgettable mark. He hit Okenna on the head with a stick, even after Okenna felled him to the ground. This was before passers-by separated them. They reprimanded Okenna, asking him why he chose to fight with the mad boy that everyone knew as Onukwube.

There was one incident that stood out in many people’s memories. It happened one morning, when Afoma had gone to fetch firewood and her mother had gone to fetch water. Obande woke up and called Onukwube to sweep the compound, when he noticed that Afoma and Ogolo were not at home. Onukwube refused to do the sweeping and Obande beat him. When Ogolo returned and met her son crying, she picked a fight with her husband. They created such a ruckus that villagers assembled to pacify husband and wife. Ogolo was insistent that her husband was trying to kill her only son. She claimed that Onukwube was the reincarnation of her late father; instead of respecting him, Obande wanted to send him into a second exile. Thee villagers sighed because they knew even before she said anything, what Ogolo would say. Onukwube usually had his mother as a shield. He was her favourite. Whenever she was not in school teaching, Ogolo could be seen fighting one teacher or the other, for disciplining her son. There was no limit to the lengths she would go, to protect her son. Even his school-mates were not spared; Ogolo had physically engaged with children who quarrelled or fought with Onukwube. It was no wonder he had no friends.

Onukwube was known as one of the villains of Nimbo community. Petty stealing was not beyond or beneath him. Whenever Onukwube entered any compound, something was bound to go missing. His infamy even extended to neighbouring villages of Uzo-Uwani; everyone called him a bad son and parents warned their children to avoid him. On one occasion when yet another case involving Onukwube had to be heard by the Igwe and his cabinet, Obande and Ogolo were summoned. But Ogolo was more defiant than usual, that day. She told the Igwe, in the hearing of all present, that he and his cabinet were envious of Onukwube; that was the only reason they often accused her precious son of stealing and other social vices. She then said that the Igwe was ‘an enemy of progress’ and that was why he didn’t have a son. It was because of the hardness of his heart and the atrocities he had committed, that the gods had punished him by withholding a son who would carry on his name, from him. That was why no matter how hard he tried, he had ended up fathering eight daughters.

IFECHIDERE is available in all Amazon markets on Kindle. It is also available as an EPUB and iBook on Smashwords, Overdrive.com, Kobo, Apple, Okadabooks.com and major online stores.