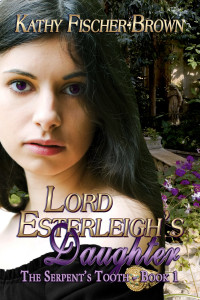 As a child, Anne Fairfield dreams of the father she never knew, the hero who died fighting the French and their Indian allies in a land across the sea. Her mother’s stories, and fantasies of her own devising, sustain and nurture her through a poor and lonely existence. Until one winter night, a strange man comes to call, and the life she has known comes crashing down like shattered glass.

Forced to confront sordid truths, secrets and lies, the headstrong young woman begins to learn that, like generations of Darvey women ruled by their hearts, she is destined to follow in their footsteps.

Set against the backdrop of 18th century England, Lord Esterleigh’s Daughter is the first book in “The Serpent’s Tooth” trilogy, which follows Anne from the rural countryside, to London society and into the center of the American Revolution.

Must Read “… the first book in ‘The Serpent’s Tooth Trilogy’ [is] a very well written plot filled with romance, suspense and danger. The author’s characters were developed well and believable…. Recommended for all suspenseful historical romance fans.” — My Cozy Corner Reviews

“…This is a dark novel that deals with the resentment and anger of a girl who has been misled and cannot seem to get past her grief …. While not a typical romance, this is a fascinating, complex story that I completely enjoyed. It is well written and entertained me with mystery, suspense, scandal, sinister characters and first love.” — Romantic Historical Lovers

With a firm grasp of her wrist, he led her through the throng. In a short time, he had helped her into her cloak and out into the January night.

“’Tis a pity you must cover that costume,” Arthur said, as a burst of fireworks lit up the sky, its colors flashing across his masked face. “I admire a woman who’s not ashamed to reveal her figure as it was meant to be, not all hooped and corseted. It’s unnatural, don’t you agree?”

Anne pulled the palla tight around herself and fastened it with a brooch. Squaring her shoulders, she refused to give in to the echoes of her own anxious thoughts.

The sky exploded again with a long succession of light and sound, as the clip-clop of horses’ hooves and the whir of wheels on pavement approached.

“Non dolet,” Anne said, as Arthur handed her into the conveyance.

“Non dolet? ‘It doesn’t hurt?’ What is that supposed to signify? Just drive on until I tell you to stop,” he said to his man, “then set us down back here.” He climbed in and settled beside her on the seat of the post chaise. “Non dolet…. Who was it said that now? If I’m not mistaken, it was Arria, wife of Claudius Paetus, a senator or something or other. He was condemned to death by the emperor Claudius…or was it Nero? For treason or something…and when the centurion presented his sword to Paetus, the senator faltered in fear. Arria snatched the sword from the centurion, and before anyone could stop her, this devoted and loving wife plunged it into her breast. She then handed the bloody sword to her husband, and said with her dying breath, ‘Paete, non dolet.’”

Anne pulled down the leather window shade and watched the lights and illuminations of Carlisle House recede into the night. Arthur leaned across her and pulled it back up, making him one with the shadows.

“We mustn’t take chances,” he explained, removing his hood and mask. “Someone might arrive at the wrong conclusion.” His face shined pale in the darkness. “Now, tell me, dear sister,” Arthur said, assuming a cheerful note. “Do you believe all that nonsense, that it doesn’t hurt to have a sword rammed into your chest?”

“I wouldn’t know.” She forced her voice past the tension in her throat.

He laughed softly. “Of course you wouldn’t.” He continued in a glib voice. “But imagine, if you will…razor-sharp steel slicing through flesh, muscle, bone. Slashing through everything in its path as it plunges straight and true into your heart. Oh, to think of all the blood! You’ve no doubt suffered a cut on your finger. It hurts, and it bleeds…sometimes profusely, doesn’t it? Imagine the pain and blood magnified tenfold. Imagine…. Ah, but we are not here to discuss such esoteric matters now, are we? My sister grows uneasy at the mention of pain and blood!”

She turned from the window and pushed up her mask. Even in the darkness, his mocking smile gripped her with a palpable chill. He’s testing me. She swallowed hard. “What is it you want, Arthur?”

“I? I thought it was you who wanted something of me.”

“You were staring at me in there!”

“I’ve already said, that costume of yours is…beguiling. You’ve grown quite lovely.”

“You knew who I was before you approached, didn’t you?”

“I was waiting for you. You arrived late.”

“You…knew I was coming?” The revelation filled her with uneasiness.

“I was aware that Captain Michael Ellerdine had procured three tickets on the fifth of January.” Her stunned silence elicited a burst of muffled laughter. “I know where you were and who you were with on any given day since the latter part of October. I have it all written down. Does this amaze you?”

“Why did you wait so long to present yourself?” she asked slowly, struggling against a sudden breathlessness. “Surely there were times when you could have—”

“I needed the proper setting. A bit of mystery, a bit of theatricality…make it all the more interesting.”

“What would you have done had Aunt Sophie recognized you?”

He yawned. “No chance of that. Do you think me such a fool?”

“I recognized you as well.”

“And you weren’t frightened?” He seemed surprised.

She hesitated. “Should I have been?”

“You were frightened at our first meeting. Took off like a fox before the hounds!”

“That was long ago.”

“We were frightful then,” he said with glee, “weren’t we?”

“Touché!” He emitted a short burst of laughter and sank into the shadows. “I admire your candor. But tell me, what was it possessed you to come along with me in the dark of night, and not a word to Auntie? I’m agog with wonder.” He sat back, in his corner of the seat, hands laced behind his head.

“I simply wished to learn more about my brother.”

“What do you wish to know?”

She stared hard into the darkness that was his face. “Are you my brother?”