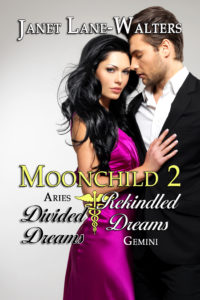 Divided Dreams. Rob Grantlan has given up medicine to become an author. As a Gemini, having two careers seems just right. His quiet days are overturned by the death of his wayward sister and his taking guardianship of his two month old niece. When he learns the father of the infant is his old flame Andi Sherman’s brother a plan unfolds. Years ago, he hurt her. He still loves her and he wants to regenerate that love.

Rekindled Dreams. Returning to Fern Lake after ten years for the funeral of his cousin and teenage enemy, Simon Parker learns his high school sweetheart is nine months pregnant and seven months divorced from his cousin.