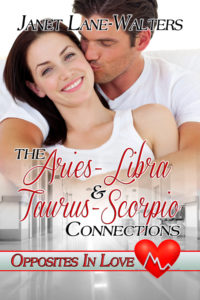 Jenessa is Aries, a nurse, union advocate and likes a good fight. Eric is Libra, Director of Nursing, and believes in compromise.

Can these two find a way to uncover the underhanded events at the hospital? They’re on opposite sides but the attraction between them is strong. She’s a widow who fought to save her husband’s life during a code. She feels guilty because the love she and her husband shared had died before his death. He assisted at the code but he feels guilty since he was the one who was responsible for the short staffing the night her husband died. Now they face falling in love and trying to solve the problems between the nurse’s union and the president of the hospital’s Board who wants a take over of the hospital by his hospital group. Is their connection strong enough to survive?

Taurus Laurel Richmond burned out as a nurse with an international health agency, she returns to Eastlake, the one place she where she felt connected. She studied nursing here and made a number of friends. Her one problem is her wealth. Soon she will receive a fortune. But money hasn’t given her the things she wants, a home, a family and love. Alex Carter is a Scorpio, a single dad with a five year old son. He’s a general practitioner at Eastlake Community Hospital. While attracted to Laurel, he has one problem. His ex and now dead wife had a lot of money and little sense. Drugs and her fast friends were her life. She abandoned their son who cried for hours until his father returned. Alex has no love for women with money. Attraction or not he refuses to admit he’s falling for Laurel.