Sign UpLogin
You are here: Home / Books / Red-Line: The Shift 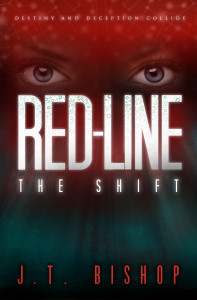 Her fate…
Sarah Randolph believes she’s just an ordinary woman, at least until the day she meets Ramsey—a mysterious man who tells her that not only is she not ordinary…she’s not even human.

Depends on him…
John Sherlock Ramsey, an Earth-born Eudoran, is a Protector. He’s assigned to help Sarah complete her Shift, a period of intense transformation experienced by those of his species. But her Shift is different and risky, because she’s a Red-Line, a member of his kind not seen in over sixty years.

Yet she is the key to his survival…
As her abilities are revealed and the secrets of their destiny exposed, they must confront an assailant who shares Sarah’s unique origins and whose motives are far more sinister than anything Ramsey has ever encountered.

Will Sarah’s unique powers change their fate? Or will she prove to be Ramsey’s last assignment on earth and watch as her people succumb to extinction?

Part one of a three-part series.