Sign UpLogin
You are here: Home / Books / Remnants of Dreams 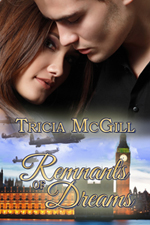 Remnants of Dreams moves from the horrors of the 1914-1918 war to the 1990s, and paints an unforgettable picture of a changing world and of working class people in North London whose only riches are love and the knowledge that they did their best.

Alicia’s indomitable spirit sustains her and her large family through two wars, illness, death and loss. From her mother’s example Sara finds the courage to escape an intolerable situation and forge a new life in a new country.

“I loved this story, although there were times when I felt tears welling in my eyes and an enormous lump in my throat. This story touched me deeply, and I won’t forget it. Watching a family struggle so desperately is not easy, but seeing them triumph over tragedy is uplifting. I enjoy long, intense family sagas like this. Tricia McGill writes so realistically that the joys and sorrows portrayed made me laugh and cry. This is a novel of great emotional depth.” Kay James for Romance Reader at Heart

“If you think this is a predictable novel you will miss not only a sweeping story of joy and sorrow, triumph and tragedy, but also an amazing overview of the century seen through a family saga. Tricia McGill takes a bold step into mainstream fiction with this book that flows like a gentle stream on the surface, but conceals a strong undercurrent and unexpected depths.” Mary Allyce

Sara followed him to the small kitchenette at the back of the house. Brian had built cupboards along one side and Sara ran her fingers along the pale yellow bench top as she leaned against the wall that was covered with pretty floral wallpaper.

“This is so nice.” She looked about admiringly as he filled the kettle and lit the burner on their new stove. “You’ve made a good job of it.”

“Thanks.” He turned to close the door. Sara shivered and he asked, “Are you cold?” The room wasn’t very large and he seemed twice as big in the cramped space.

Sara shook her head, looking down as one of his large hands reached for one of hers. “Your skin is so white,” he muttered, and she began to tremble all over. His palms rubbed up and down her arms then and she could feel the small calluses on them.

Goose bumps rose all over her skin. “Why, you must be freezing,” he said softly, his voice growing husky, as if he had a catch in his throat.

“No.” As she denied this a tendril of her hair brushed his face and he gave her a startled look. His fingers seemed to have a life of their own, for they wandered slowly on her skin, exploring. Sara sighed with pleasure. Brian stared at her mouth.

“Don’t look at me like that,” he scolded, meeting her eyes. He’d moved so close his warm breath stirred the hair at her temples, wafted over her face.

“Like what?” Her voice sounded low and husky, and somewhere deep inside a pulse throbbed.

His palms cupped her jaw and his thumbs began to stroke her cheeks. “I hope I’m mistaken, but all my senses tell me I’m not.”

“You’re not, and you know it,” she whispered. “From the first moment I set eyes on you I wanted you for my own. I could have killed Jane for getting you.”

“But you’re married to Dennis and I’m married to your sister–it’s much too late for these declarations,” he rasped, his hands moving to her shoulders and cupping them to shake her.

“Ah, love.” He swallowed hard. “But you’re stuck with him, Sara, and I’m…” He lifted his shoulders in a helpless shrug.

“We could run away together. You, Rosy, and me,” she broke in desperately, her eyes widening hopefully.

Sara grabbed his arm and protested, “Don’t tell me you don’t feel something for me. I can see it in your eyes. You feel the same as me.”