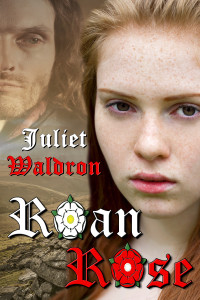 “Loyalty Binds Me” was her King’s motto. Rose, his servant, lived it.

A Game of Chess

The King of England and I played chess, passing his sleepless hours. After years of struggling with the game, I can truthfully say I’d become a formidable competitor, although never his equal. I will stand firm upon this, even though I am a servant and a mere female.

Nightly, our forces swayed back and forth across the board, ‘til the birds began a summons to Dawn, calling her, as harpers say, from that silken couch whereon she dreams. We sat in a circle of candlelight in a small, high room at the palace of Westminster. From our vantage point, the dark river ribbon, spangled by summer stars, flowed below a single, open window. The distance was sufficient to prevent the smell from blighting the view.

Of late, I had won a few matches. This I credited in large part to the King’s growing distraction and exhaustion. By June of 1485, it was clear his rule had unraveled.

What other choices, however, could my Lord have made? If he had let his nephew ascend the throne, his own head, sooner or later, would have become the trophy of his vengeful sister‑in‑law. Either that or he would have been arrested and mewed up somewhere, murdered in secret, like so many unfortunate members of his family.

Richard Plantagenet knew history, and he was not a passive man. All he’d done in deposing the boy was to strike his enemies before they could strike him.

There is a queasy mystery in the hours between two and four. The board, with its black and white squares, swam before my eyes. I, too, was tired to my very bones. The King’s wakefulness had become his servant’s.  I had been about to make my move when his foot, under a long red robe, touched mine beneath the table.

He knows how greatly I love him, how I hunger for his touch!

Concentration broken, I met his brilliant hazel eyes, burning deep in hollows of chronic sleeplessness. A slight smile curved those thin, mobile lips, but his gaze returned naturally to the board.

Our relationship had always been singular. Only recently had it turned customary. Since his queen, the mistress I’d served and loved for nigh unto twenty years, had died,  the Master had turned for comfort to his bondswoman. So it has always been.

This is why his touch distracted me, made concentration falter. I began to wonder if the move I’d planned was so very clever after all.

My hand wavered over the few remaining pieces. Traps lay on every side. Several I saw clearly, for I’d been playing chess with Richard since our shared childhood. Whatever coup de grace he’d planned, I feared I’d never see until too late.

“That wasn’t fair, My Lord.” In our secret kingdom of night, high titles, and much else customary between master and servant, had been abandoned. “Check,” I added, uncertainly.

I’d revised, chosen to move my last knight to pin down his king. Of course, I knew quite well that second guesses are nearly always fatal at this depth in a match.

Richard lifted a dark brow in triumph. “Nothing in this world is fair,” he declared. As his hand went for it, I saw my doom—a hooded bishop, far across the board.

“Checkmate.” He extended his jeweled, elegant fingers, using the piece to nudge my helpless king.

“You touched my foot on purpose, My Lord.”

“Quite right. What of it?” It was worth losing any number of chess matches to see him smile. Always glorious and rare, it had, lately, become a thing of legend.

“Old Dick” didn’t smile. This was well known all over his Kingdom. Like a great many other things that are well known, there was not a grain of truth in it.

“I don’t mind, My Lord.  It’s only that you used to win by your wits, and now it seems you must rely upon the lowest wiles to best your humble servant.”

He laughed shortly, enjoying the backchat, but it was not an entirely happy sound. Playing with my white king now, turning it between ringed thumb and forefinger, he said, “It would have been far better for me had I learned low tricks at a far earlier age.”

What could I say? Crouching at the back of this night’s wakefulness lay the same old horror.

Poor little Princes! The pawns are always the first to go…

In my Lord’s case, crime had brought, as it so rarely does in this wicked world,  punishment not only swift, but apt. In the space of sixteen months, the King had lost his adored son and his dearly beloved wife, my gentle mistress.

On this summer night, Richard Plantagenet had traveled almost to the end of his earthly course, to the desolate, crow-haunted land where mortal tribulation ends. Gazing at the ruin of our board, I believe we both knew it.