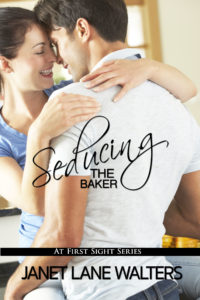 She was the only girl to turn him down. What will happen when business and a wedding bring them together again.

Jules Grayson was a player as a teen and that hasn’t changed. Business and a friend’s wedding join to bring him to the place where his life had imploded and where his trust issues began. A Ponzi scheme and a suicide forced him into a group home he hated. For ten years he has avoided returning.

Grace Sutton is faced with a dilemma added to by the appearance of Jules in her Sweet and Spicy Cupcake bakery. Years ago she turned Jules down but she had a crush. His appearance erodes the vow she made years ago. Men had used her mother and led the woman into drugs and alcohol. Grace vowed to forego relationships with men until she could support herself. Though the bakery is making money, she doesn’t feel secure. When Jules arrives with a contract for a magazine feature, she is conflicted and attracted.