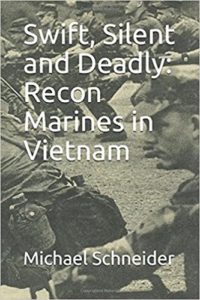 Imagine being one of a 7-man team in the middle of a jungle where any person you might encounter will try to kill you. This is enemy territory, inhabited by an unknown number of enemy combatants. You might encounter 1 or 2 of the Viet Cong or North Vietnamese Army or just as easily 50 or more. In addition, there is the danger of man-eating tigers and poisonous snakes! Your mission is to find the enemy without them finding you. You are to report their position so that artillery batteries, bombers or helicopter gunships can destroy them without risking the lives of infantrymen in a hazardous jungle assault. You must keep quiet lest you be detected. The brush is so thick it’s hard not snap twigs or crunch brush. You find a trail; but you can’t walk on it because it may be booby-trapped with land mines. What sort of men would willingly undertake such a mission? Swift, Silent & Deadly tells the story of Recon Marine heroes in Vietnam. Many of the men covered in the book are no longer with us. Some were casualties of war. Others just haven’t survived the years that have passed since the end of the war. There are still plenty around to tell their story, however, and some of those are included in this book.