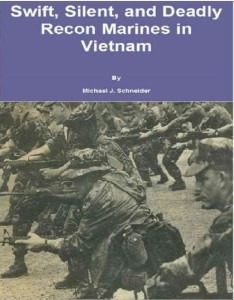 Imagine being one of a 7-man team in the middle of a jungle where any person you might encounter will try to kill you. This is enemy territory, inhabited by an unknown number of enemy combatants. You might encounter 1 or 2 of the Viet Cong or North Vietnamese Army or just as easily 50 or more. In addition, there is the danger of man-eating tigers and poisonous snakes!

Your mission is to find the enemy without them finding you. You are to report their position so that artillery batteries, bombers or helicopter gunships can destroy them without risking the lives of infantrymen in a hazardous jungle assault. You must keep quiet lest you be detected. The brush is so thick it’s hard not snap twigs or crunch brush. You find a trail; but you can’t walk on it because it may be booby-trapped with land mines. What sort of men would willingly undertake such a mission?

Swift, Silent & Deadly tells the story of Recon Marine heroes in Vietnam. Many of the men covered in the book are no longer with us. Some were casualties of war. Others just haven’t survived the years that have passed since the end of the war. There are still plenty around to tell their story, however, and some of those are included in this book

Camp Reasoner, located about 3 miles north of Danang, Republic of Vietnam, was the base camp for many of the reconnaissance Marines who served in Vietnam.  At Camp Reasoner the Marines enjoyed many of the comforts associated with being stationed in the United States: hot food, cots to sleep on, buildings called hootches with corrugated metal roofs to shed the rain and screens to keep out the mosquitoes.  Other amenities available to the Marines at Camp Reasoner included an outdoor amphitheater, a handball court, a laundry, and two clubs, one for the enlisted men, the other for Staff Non-commissioned Officers, and Commissioned Officers.  The clubs mainly served beverages, beer for instance, and varieties of soft drinks. The purpose of this chapter is not to talk about the camp; but the man who gave it his name.

Frank Reasoner came from Kellogg, Idaho.  He was a very ambitious youngster.  At the age of nine he started earning his own way with a paper route.  In spite of only growing to 5 foot 7 inches tall, he played football, baseball, and basketball in high school.  Frank liked boxing the best.  To excel at this sport, worked out with weights and trained incessantly.  By the time he graduated from high school, he had a new ambition, The United States Marine Corps.

After enlisting at the age of seventeen and completing boot camp, Frank sought a new goal, to be an officer.  Without a college education, however, it wasn’t possible to get those lieutenant’s bars.  College cost money and enlisted Marines didn’t make that much, so Frank decided to try for an appointment to the United States Military Academy at West Point.

Frank didn’t have the best educational background to compete for an academy appointment.  Congressmen and senators appoint candidates to the Army, Navy and Air Force academies.  Since each member of Congress can only have 5 constituents in an academy at one time, only one out of the 10 they are allowed to nominate each year to West Point is actually chosen.  Naturally this makes the competition among applicants keen.

Frank had a poor academic background.  In high school he had taken mostly shop courses and bypassed most mathematics, science, English and social science classes.  In order to score well on the entrance exams, the young Marine attended the Naval Academy Preparatory School at Bainbridge, Maryland.  Here he got the necessary training to win an appointment to the U. S. Military Academy at West Point.

At West Point, all freshmen or first year students are called plebes.  As plebes, they are subjected to tremendous harassment by their upperclassmen.  This harassment is actually part of their military training.  The plebes learn to perform well while being harassed, a preparation for the days ahead when they may be called on to perform difficult duties while enduring the chaos and confusion of battle.  Cadet Reasoner did so well his first that he was honored as the “Outstanding Plebe”.

Frank’s sports interests followed him to the academy.  He was too short and light to play football, but played baseball his plebe year and wrestled and boxed all four years.

Cadet Reasoner excelled at boxing.  He was the brigade open boxing champion three of his four years at West Point.  A broken nose prevented him from gaining the title his fourth year.  Graduating from West Point in 1962, Frank left the Army to return to the Marines where he was commissioned as a second lieutenant.

By the Spring of 1965, America’s involvement in Vietnam had gone beyond providing military “advisors”.  The United States was now deploying combat units.  Frank Reasoner’s battalion, the 3rd Reconnaissance Battalion, was ordered from Hawaii to Chu Lai, in the then Republic of Vietnam.

Frank first served as a platoon commander with Company B, 3rd Reconnaissance Battalion.  After this unit was transferred to the 3rd Recon command post at Danang, Lt. Reasoner requested and was given command of Alpha Company, 3rd Recon.  During a training exercise at China Beach, Frank intimated to a friend, Lieutenant Meyers, that he didn’t expect to go home alive.  While many men with a premonition might seek safer duties, it was not the case with Frank.  As company commander, he no longer had any obligation to take reconnaissance teams on patrol.

Nevertheless, on July 12, 1965, Lt. Reasoner and 1st Platoon, Company A, boarded helicopters at Danang for a ride to the town of Dai Loc.  The platoon commander was 2nd Lt. Bill Henderson.  Other members of the platoon included sixteen enlisted Marines, one Navy Corpsman, and a Vietnamese dog handler with his German Shepard.  The mission of the platoon was to scout an area south of Danang where elements of the 9th Marine Regiment had encountered the enemy.

Arriving at Dai Loc, the platoon set up a relay station at the little fort manned and maintained by the Army of the Republic of Vietnam.  Leaving behind two Marines to man the radio relay, the rest of the platoon moved up a dirt road out of the town.  The road would take them through villages and rice fields, first to the west, then to the north.

As they were leaving town, Reasoner’s platoon passed about fifty uniformed and armed Vietnamese, which the Marines took to be a local militia.  The ARVN dog handler, however, tried to convince the Marines those troops were actually Viet Cong.

This was not a normal recon patrol.  These men were used to being able to conceal themselves in heavy foliage.  On this mission, however, they had to walk in the open, in daylight and through some not too friendly looking villages.

Approximately three hours into the patrol, while approaching the small village of An My, the platoon started receiving sniper fire.   Lieutenant Henderson took half the platoon and went off in search of the sniper.  Lt. Reasoner led the other half of the platoon into An My.  As they entered, they noted that some villagers appeared to be hiding and some of the population missing.  The team pushed on as a rainstorm hit and drenched the team.  They passed a barrier fence of bamboo and cactus, crossing a ditch and came upon a graveyard with low, rounded grave mounds.  Beyond the graveyard was a grave of trees and a small hill to the left.

Two of Reasoner’s men spotted three Vietnamese in ponchos wearing helmets.  These three Viet Cong spotted the Marines and ran toward the small hill.  The Marines began to fire at them.  The Viet Cong answered with a hail of machine gun fire from a fixed Soviet-made machine gun mounted on a tripod at the position on the hill.  Soon additional fire poured in from the area near the machine gun.  There were apparently more than three VC!  The only cover the Marines had were the circular graves.

Since the enemy had the high ground, they were able to keep the Marines pinned down.  Enjoying this advantage, the VC attempted to surround the Marines on the right and left flanks.  The enemy began to inflict casualties.  First they wounded the platoon sergeant, then Lance Corporal Hall, who had the M-79, which the team needed badly.

As the sun sank towards the horizon, Henderson’s team reached Reasoner’s.  The Marines were now receiving fire from three directions, from an enemy that outnumbered them six or seven to one.  The most formidable was the VC machine gunner who held the advantage of a superior position. Lt. Reasoner ordered Lt. Henderson to withdraw to the helicopter landing zone.  As the Marines withdrew, assisting the wounded, Lt. Reasoner directed covering fire.

LCpl Shockley, seeing that the other radioman’s antenna had been shot off, realized Lt. Reasoner had no communications.  Shockley scurried through the machine gun fire and managed to land next to the lieutenant without being hit.  Unfortunately a VC bullet then found Shockley’s elbow.

In an attempt to suppress the murderous fire from the well-placed, tripod-mounted machine gun, Lt. Reasoner repeatedly exposed himself to attack and killed at least two Viet Cong.  One of Reasoner’s men finally took out the deadly tripod-mounted gun with the M-79 grenade launcher; but the Viet Cong continued the assault with other automatic weapons.  LCpl Shockley was then wounded a second time.  Lt. Reasoner ran for the wounded Marine; but Viet Cong bullets struck him, and he fell dead.

Five Marines traveling across the ground in a low crawl managed to reach the Lieutenant and recovered his body.  Then they retrieved the wounded Shockley.

For his action, “In face of almost certain death…”, Lt. Frank Reasoner was awarded the Congressional Medal of Honor.  The Medal of was not the only recognition Lt. Reasoner received.  The Marine Corps named the main home of the Reconnaissance Marines, Camp Reasoner.  The Navy built and commissioned a frigate as the USS Reasoner.  This ship served the Navy as part of the active fleet for 23 years.  Back home, Kellogg High School honored their distinguished graduate with a wall mural of him, and establishing the McCoy-Reasoner Award.  This award, named after Lt. Reasoner and an Air Force serviceman is presented each year to an outstanding athlete from the high school.  Kootenai County, Idaho also maintains a picture of him in the courthouse at Coeur d’Alene.