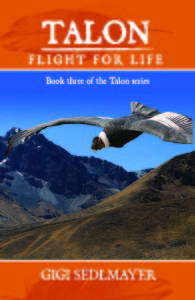 Matica and her family are planning a holiday in Australia. She and her father travel to Cajamarca to organise supplies and air tickets. Although she misses her condors on the walk to the city, she sees wondrous scenery, rainforest, animals and birds.

On their walk, disaster strikes. Her father is seriously injured on the way home after being bitten by a huge spider and contracts a high fever. Not knowing what to do, Matica calls to her condors for help. The wait until they arrive is the hardest thing she has ever had to endure.

Journey with Matica through her adventures, laughter and tears. Enjoy the feeling of friendship, love and camaraderie between Matica and her condors, Talon, Tamo and Tima.

Humph.’ Frustrated, Matica sighed heavily then pushed her empty plate into the middle of the table. Crossing her lower arms and placing them on the table, she laid her left cheek onto them and looked gloomily at Talon who stood beside her, grooming his feathers, what he regularly did these days. ‘Talon,’ she whispered.

His head snapped up, eyeing her. ‘Should I really go with Dad to Cajamarca or should I stay here with you?’

Mira, Aikon and Matica were sitting at the bench outside, finishing their last lunch together. After the storm and the heavy rain that had hit the village five days earlier for two days, it was now only partly overcast with little rain here and there. Today was the first day with only scattered clouds and no rain up to now.

Since the storm had settled down, Crayn had decided, with the go ahead from Pajaro, the leader of the village, to walk with his daughter to Cajamarca, the next big city, as he had planned. For Matica it was the last day together with her condors and the last time where she could fly on Talon for the next five days, since it would take them five long days to walk to Cajamarca and back. And tomorrow morning they would set out.

Aikon, who sat opposite his sister, leaned over the table, trying to look into her eyes but couldn’t because her eyes were only on Talon.

He accused her, ‘Mat, what’s wrong with you? Wasn’t Talon’s embrace enough? You should be cheered up with that embrace, you know? That’s why he did it, to cheer you up. I would have been, I tell you that.’

Mira put her hand on his arm and whispered, ‘Aik, let her be. Talon is the only one who can and will cheer her up and will tell her to go. We can’t, neither of us.’

‘But Talon cheered her up already with that incredible embrace he gave her,’ Aikon said, reproachful. ‘What else does she want?’ I need to know.

‘I know, Aik,’ Mira said, still looking at her daughter. ‘I thought it would have been enough too, but I guess it isn’t enough. It might be enough for the time being; however, now she’s probably thinking that she can’t fly on Talon for the next five days. And that makes her moody again. Yes, that’s it. She’s gone back to the moody state. So I think we have to let her alone.’

Talon had watched their conversation, trying to understand what they were saying. But now he put his attention back to his best friend.

Eyeing her, and seeing her sadness in her eyes and feeling it in her whole body, Talon laid his beak into the nook of her arm, looking into her face and grunting.

But Matica, not reacting to Talon’s doing, just looked at him, not moving at all, not saying anything, not even blinking. Nothing. She appeared to her mother and brother as if she was on another planet far, far away.

Talon looked questionably back at Mira. Mira shrugged her shoulders then waved her hand in front of her daughter’s eyes. Matica didn’t even flinch, as if she wasn’t in her body. Aikon poked with his pointing finger into her cheek. Still no reaction came from her. It looked as if nothing could cheer her up, absolutely nothing.

Talon unfolded one wing and laid it on her back, stroking her gently. Finally focusing her eyes on Talon, Matica inhaled deeply, and slowly she came back to the reality, to the now. She lifted her head. Deep lines spoiled her forehead. ‘Talon, my dear Talon, should I really go with Dad to Cajamarca tomorrow? I mean really, really, really? We can’t fly for a week … or can we? Will you come with us? You see, I don’t know how long I’m able to fly on you. That’s why I’m so hesitant to go with father. Otherwise, I would love to go with father. But they’re five long days where I can’t fly on you, then.’ She grabbed him around his neck and embraced him impetuously.

Talon let it happen, hanging in her arms, closing his eyes now. ‘I can’t stand it. Please come so I can fly every day and so that I can see you, love you. Please, Talon?’

Talon pulled out of her embrace; however, he left his wing on her back to comfort her. Then he nodded strongly and then he screeched.

It wasn’t a loud one, but it was one to acknowledge she should go and then he poked her in her side, even pushing her with his head.

‘Talon, are you telling me to go with Dad?’

Looking at him, she finally said, listless, ‘All right. I’ll go.’

Talon screeched the same screech as he did before.

‘What are you telling me now?’

Talon poked her in her cheek. ‘You will come every day and we can fly on the way?’

‘You tell me to go and tell me that you visit us on the way, finding us, wherever we are, so I can see you, love you and we can fly every day?’

‘Oh, Talon. Thank you, thank you.’ Out of sheer happiness, because she believed him that he would come and they could fly every day, she embraced him again, nearly falling off the bench and onto him.

But she held herself up by holding on at the table.