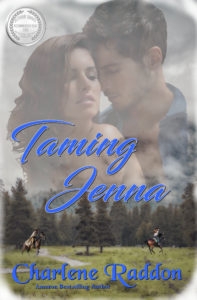 Deserted by her father at the tender age of seven, Jenna Leigh-Whittington had taught herself to ride, shoot, brawl…and steer clear of the opposite sex. But now, in a lonely Utah canyon, the Pinkerton agent has drawn her gun on a rugged stranger—only to discover that, far from the dangerous outlaw she’d been tracking, he is Branch McCauley, hired gun…and the most irresistible rascal ever to tempt and torment a woman!

THE RIGHT WOMAN
If there’s one thing McCauley trusts less than a female, it’s a female who packs a six-gun. But what a woman! Vowing to bring the sensuous hellcat to heel, McCauley has no inkling that their passionate battle of wills has just begun. Taming Jenna will be the most seductive—and satisfying—job he’s ever taken on.