Sign UpLogin
You are here: Home / Books / Tharon Ann – from orphan, to actress, to mother, to seeker

Tharon Ann – from orphan, to actress, to mother, to seeker 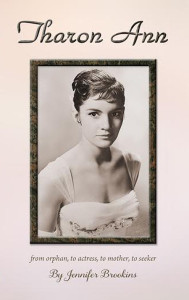 Tharon Ann is a memoir of one woman’s life, from orphan, to actress, to mother, to seeker, as the book’s byline summarizes. It is written in several voices as her life progresses; the first, her childhood, a voice reminiscent of Faulkner, Williams, and other southern writers; the second, that of an actress who takes us with her into the world of movies, theatre, and television; the third, of a wife and mother who as a single parent, along with her small boys, puts us into the “Old Chevy with a suitcase tied to the top” trekking cross-country to a new life; and finally, the fourth about the richest part of her life, which allows us access into a fantastic journey of the spirit, with openness, humor, and charm. The book is more than a memoir in the traditional sense. It is a road map, a guide on determination, on achievement against all odds on that thing called hope. Visit: http://www.amazon.com/Tharon-Ann-orphan-actress-mother/dp/0692239960/ref=cm_rdp_product