Sign UpLogin
You are here: Home / Books / The Broken Mirror 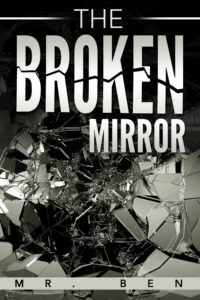 Tom and Cynthia’s divorce saw an end a once-upon-a-time happy family and the beginning of discord in the lives of their identical twin daughters—Sophia and Cindy. Having been raised separated by the estranged parents living far apart, Cindy, who would always take sides with her mom, before and after the divorce, ended up hating Sophia, Tom’s favourite. The cancer they carried affected their friends, particularly Daniel, who would live long enough to write the account—The Broken Mirror.

Cynthia made known her rage at Tom’s derogatory statement.

“You’re a total disgrace to manhood! I’ve been accommodating your excesses for years! It’s time for me to rage because you’ve pushed me to the wall! You’re an idiot! You are a never do-well! You’re an infidel! In fact, you’re hopeless!! I’m still married to you because of my twins-Sophia and Cindy!!!”

In the heat of altercation, Tom took laws into his hands by beating Cynthia to a pulp. It took the intervention of neighbors to bring to a halt the uproar. To add insult to injury, Tom didn’t bat an eyelid as he, in the presence of his tears-shedding twin daughters, was beating the living daylight of Cynthia. Alas, the damage was done as Cynthia was second to dead; she hardly could breathe. As a result, she had to be rushed to a hospital; a stone throw from the residence of the couple.

Tom and Cynthia have been lovers since their days at the Oakland-based University of Kimberly. As easy-going lovebirds, they became the cynosure of every Tom, Dick and Harry who came in contact with them. After completing the stipulated academic sessions, Tom and Cynthia qualified as medical doctor and accountant respectively. He got employed at the prestigious Stanford Hospital as Residing Medical Officer, Oakland, and after a while, she was employed as Chief Accountant by the renowned Paterson Accounting firm, situated in the same Oakland. It wasn’t too long that they decided to tie the nuts. Many months after the one-in-town marriage ceremony, Cynthia was delivered of a set of female twins, whom they later named Sophia and Cindy. Both Tom and Cynthia were enjoying their professions.

The passion, intelligence and success philosophies edged Tom and Cynthia over their colleagues in their various endeavors. Work went on as usual for Tom until a fateful Friday morning… This would be most red-lettered moment in the life of Tom.

It was reported that there was missing medical equipment worth millions of dollars. This, according to audit report, showed a huge imbalance in the hospital’s account summary. Concerned the management was, the attention of Tom was urgently sought for. They inquired of him as to why the equipment was missing, since it was his onus as Residing Medical Officer, to ensure their safety. Unknown to him, there was a conspiracy against him by his colleagues who envied his progress and excellence.

However, this would not necessarily matter as he was given matching orders by tendering his resignation with no pay-off, despite his five years of service. His explanations were blurred as naivety took the best of him. The management reasoned that Tom’s weight of excuse for not been responsible for the missing equipment and a consequent need for exoneration didn’t hold waters. It wasn’t too long after his resignation that Mark, the chief conspirator of his misfortune, was appointed to fill the position previously held by him. Although Tom would be justified and compensated heavily in a distant future, his life assumed a U-turn.

From pillar to post, Tom job-hunted. He went the extra-mile of contacting his friends who were top guns in their fields of recognition. Yet, it all ended in a wild goose chase!  Frustration so possessed Tom that he retired to incessant drinking, smoking, womanizing, keeping late nights and lazing around. Cynthia, now shouldering the weight of the family responsibilities, had to stretch her working limits. She engaged herself in entrepreneurial marketing after the close of her eight-to-four working hours, daily. She did all these to ensure ends met.

“The once-upon-a-time happy family is gradually becoming disunited, bit by bit”, Cynthia muttered, lying helpless on her matrimonial bed, but looking back at the good-old days she shared with Bode during their days at the University…

But to make matters worse, her nagging disposition towards Tom’s lifestyle assumed cats and dogs scenes. She became his punching bag. This was usual until when Tom, who was under the influence of alcohol, took laws into his hands by beating Cynthia to a coma- it took the saving grace of close neighbors to alert the attention of a team of Standford paramedics- after she was hurriedly rushed to the hospital.

The severity of Cynthia’s state of health meant she’ll be admitted for two weeks. Calls were made to Ken, Cynthia’s lawyer, to initiate a divorce suit. At this time, Tom hasn’t recovered from the alcohol intoxication that made him go gaga on Cynthia. Not moneyed at all, on realizing what he did, Tom hurriedly went to the hospital where she was rushed to and see for himself what he inflicted on her. It took a kind gesture from Ken to foot the medical bills. Getting to the hospital was another drama- he was led to the ward where his wife, recovering at the time, was receiving medical attention.

As he got into the ward, Tom heard the greatest embarrassment of his life from the bed-bound and angered Cynthia: “get out of here, you infidel! You’ve gotten what you wanted; beating me into a coma! But guess what? I’m not dead! I’m going to divorce you!” The sadness on the face of yet-to-be-fully-recovered Cynthia left Dr. Mike with no choice than to see Tom later. A divorce suit and helpless state of joblessness would make Tom’s life change from the frying pan of hardship to the fire of continued struggle!

Two weeks after Cynthia was discharged from the hospital, she avoided the arms of Tom and comfort of her three-bedroom apartment she once enjoyed with him to seek the hands of lawyer Ken, her childhood friend, for a divorce. Three months later, a letter was sent to Tom by the lawyer stating that he must come to the court for a divorce suit by Cynthia. As anticipated, Tom turned up but with no lawyer; guilt was read all over his face. Cynthia and Ken were on hand to ensure Justice was administered to Cynthia’s advantage. Without much ado, the case was taken seriously by the Presiding Judge, Gary .B. White. His final verdict, considering all evidences leveled against him with respect to his pathetic financial state, was that both Tom and Cynthia legally separate and a Certificate of Divorce be issued:

“This is my verdict: under section 1, sub-section 2 of Oakland’s marital law, I hereby declare Tom and Cynthia divorced. As they both wish, they can take in each other’s custody ONLY one of their twin daughters. Either party can visit his or her twin daughter at least four times in a year. Both Cindy and Sophia must be under the custody of their respective parents until the age of maturity as provided in the constitution of this great state”.  Soon after he made the verdict, he left the courtroom, housing a number of Tom’s and Cynthia’s family members with Tom, Attorney Ken and Cynthia were conspicuously present. One thing was obvious; Tom felt the world had come crashing on him!

Their lovely daughters, Sophia and Cindy had to part ways with Sophia under Tom’s custody and Cindy under Cynthia’s care. Sophia and Cindy, 5, had to be separated by the decision of the court and by their individual consent. Sophia was Tom’s favorite ‘girl’ while Cindy was Cynthia’s ‘special kind’. As expected, Sophia clenched to Tom while Cynthia held onto Cindy for care.

“Tom, I know you prefer Sophia over Cindy. Now, let me have Cindy while you have your Sophia” Cynthia requested.

“Why are you irrational, Cynthia?” Tom asked

“For the past five years of their lives, I watched you give special preference to Sophia. You really don’t show any love to Cindy. She’s to you not your daughter. But as for me, Cindy is my other half. Not only does she have my physical looks but my character. Sophia is just your replica. She has your looks and general characters. I hope in future, she will not take to drugs and become a whore!”

“Mom is right. Dad, I hate you! You’re such a wicked man! Why would Sophia be your girl instead of me? Dad, I agree with mom…you are indeed pathetic!”

“She won’t shut up, Cynthia!!! Cindy, shut up!!!  You’re indeed irrational. In the presence of your daughters, you are voicing out words they ought not to hear. Look at you! Listen to what your daughter just said. No thanks to your training! Cindy thinks it’s the right thing been with you. Because you’ve always fed her with lies! If not for what happened to me at the place of work, I would have taken care of them properly. But because you fed her lies, she is now what you’ve made her be. Cindy, you mom isn’t telling the truth. She is just…”

Cynthia interrupted, raising her voice: “Look pot calling kettle black! Tom, you have the nerve to say to me that I’m irrational. Wasn’t it you that beat the hell out of me? Were you not the one that took all kinds of women to the house, smoked and drank incessantly while I plead in tears for you stop to the habits? Tom, you forgot so soon that it was you that beat up to a coma. I’d have been dead if not for the help I got from neighbors.  I thank God I’m free from your bondage! I thank God you’ve ceased from being my husband!”

“Why’d you expose my shortcomings to the hearing of Cindy and Sophia?” Tom reacted, feeling embarrassed. “They’re still way too young to hear this! They shouldn’t be around when matters like this are discussed. But now, you have brought to their remembrance what happened in the past. Why are you so unfair, Cynthia? You know you’ve also had your can of worms. But I covered them up for the sake of the kids. Or is it because we are divorced you have the effrontery to say what you like?”

“Yes”, Cynthia replied. Rage engulfed her face. Tears were seen dripping from her eyes. “This is the happiest day of my life. Tom, to be frank with you, it’s been a long walk to freedom from your marital bondage. I now would have the time in the world for myself and my daughter. I’ll be able to take proper care of her until she’s ripe for marriage! I know you’d like to beat me up. But hey, am I your wife? No!!! Remember, in a couple of weeks, Cindy and I will be out of your life for good Point of correction, Tom, I want you to know that your daughter, Sophia and my daughter, Cindy are 5 years of age. They are old enough to know what’s happening!!!”

“Sophia, go to your room and have some rest.” Instructed Tom, whose countenance embraced a moody look. “You look so worked up! As for me, I’ve decided to keep my anger to myself and walking out of the house. Cynthia, you could stay in the house with your daughter. Have the whole place to yourselves!!!”

“Mom, we have the whole house to ourselves! But you seem not happy! Why?” Cindy asked, looking excited.

“This isn’t your home. In no time, you and I will be out of here soon! So, don’t feel free because he’s not here to do what he does beat; smoking, drinking, beating me up and womanizing” Cynthia answered in anger.