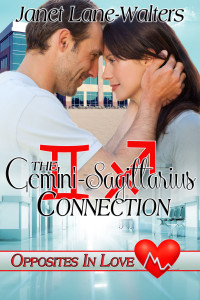 Gemini Liz seems to be following her sign. She’s the mother of twin boys, she’d returned to Eastlake for the second time and she’s taking her second position as a nurse manager. She feels moving from the city will be good for her sons who sometimes choose the wrong friends. What Liz doesn’t want is a second husband. The death of her fireman husband made him a hero but devastated her life. She had to return to work and become a single mother. Fortunately her father-in-law has stepped in to care for the boys but he wants to retire to Florida. Though she’s attracted to Jeff she wants to deny the attraction.

Jeff is a Sagittarian who often suffers from the foot in mouth disease. His wife died years ago but she was the perfect wife and he has no desire to fall in love or marry again. As a neurosurgeon he sees Liz a lot since she is the nurse manager of the ortho/neuro unit at the hospital. He also wants to deny the attraction and finds it harder and harder.

Can a pair of mischievous boys find a way to help their mother and the doctor find love again?