Sign UpLogin
You are here: Home / Books / THE LOVES WE LEFT BEHIND

THE LOVES WE LEFT BEHIND 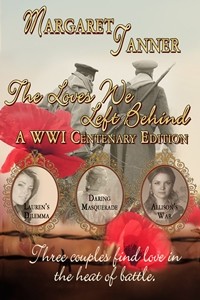 A hundred years ago, from the far flung corners of the British Empire, young men rushed to fight for Mother England. They left their wives and sweethearts behind. Many of these brave women waited in vain for their men folk to return. How did they cope with the loss and heartache? Could they ever hope to find happiness with another man? Three full novels, each telling a brave young woman’s story of triumph over tragedy and adversity. Allison’s War, Daring Masquerade and Lauren’s Dilemma.

Allison’s War: In 1916, on the French battlefields, a dying soldier’s confession has the power to ruin the woman he loves.

Daring Masquerade: Harriet Martin masquerades as a boy so she can work with her shell-shocked brother, falling in love with her boss wasn’t part of the plan.

Lauren’s Dilemma: Lauren Cunningham, carrying the out-of-wedlock child of a soldier, marries another man who is unjustly tried for murder. To save his life, will she publicly admit her sin, and risk the diabolical consequences that will surely follow?