Sign UpLogin
You are here: Home / Books / The Scent of Roses

The Scent of Roses 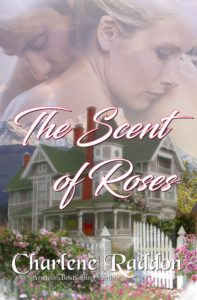 A WOMAN’S SMILE
Rosalyn Delaney’s husband, Josiah, had vanished six years ago. Following a private detective’s lead, Rosalyn leaves Salt Lake City and boards a train heading t the mining town of Whiskey Ridge, Arizona. She arrives at Rose House, an old mansion reputed to be haunted, only to discover her missing husband has been killed, and his business partner, Whip Kincade, is wanted for his murder. Determined to uncover the secrets surrounding Josiah and his death, Rosalyn decides to stay-even when she begins to receive nightly visits from a charming “ghost”…
A GHOST’S KISS
Escaping a troubled past, Whip Kincade had hoped he could make a fresh start by coming to Whiskey Ridge and opening a saloon with his friend, Josiah. Now as a murder suspect hiding in his own house, Whip’s future looks bleak indeed…unless he can find the real culprit. But the unexpected intrusion of Rosalyn ruins his plans of sneaking out at night to investigate. Scaring her away is the first step in clearing his name, but Rosalyn doesn’t rattle easily. And Whip isn’t sure he wants the lovely widow to walk out of his life—especially when she would take his heart with her…

The big house brooded on its lonely hill. Inside, the walls echoed with stillness. A teasing breeze whispered through tiny crevices to lift thick dust, swirling it through abandoned rooms and along hidden passageways no guest had ever seen. Then, like a phantom, the breeze vanished in slanted rays of sunlight. The dust settled, the stillness returned, and the house heaved a sigh of boredom and regret.
Once, the walls had sung with cheerful sounds, with the chatter of women, and the laughter of children. Hopes. Dreams. Plans for the future.
Dashed forever by the crack of a bullet.
After that, years of silence . . .
Outside, valiant roses scented the air. Virginia creeper and trumpet vines choked the house’s proud facade, nearly obliterating doors and dust-caked windows. Hummingbirds whirred and hovered and supped from blazing blossoms. Bees sought their own nectar, and birds tended nests, ignoring the midnight-black cat skulking below. Masses of dangling green tendrils screened the empty porch swing, as if to shelter young lovers, stealing a kiss.
Years had passed since the walls last quivered with passion or sung with ecstasy. Gone were the pleasant sounds, the peaceful, happy sounds the house yearned to hear again. Sounds now relegated to the past, as well as to some future day the house knew would come.
And so the house brooded, and waited.