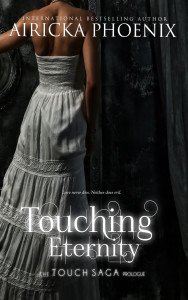 Before Fallon was created to destroy. Before love became the ultimate weapon of destruction. There was Amalie and the horror that started a revolution that tore the fabric of humanity, of everything standing in the balance between power, hope and survival.

Amalie has one wish, one gnawing desire — she wants to die.
She wants to leave this world behind with its pain and darkness. She wants to finally breathe. But Amalie is a prisoner, a disease, not fit for life. She is unwanted, unnatural. She is defective, something useless and broken. Her own mother hadn’t wanted her. Her father hated her. The world shunned her and the only person she had ever loved, truly and with all her heart and soul, couldn’t stand the sight of her, couldn’t stand the thought of ever being with her. She repulsed him. Her insanity disgusted him. He’d forgotten her. He’d left her behind, deserted and abandoned her to a madman hell bent on crushing her, stealing her soul and shattering her will.

But what if she’s finally given hope? A reason to live? Can Amalie finally accept the hand offering so much for so little in return? Can she love again when she has nothing left to give?

Can she finally be free?