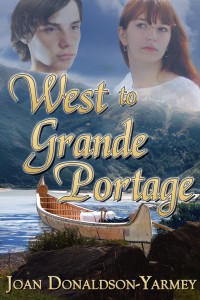 On his sixteenth birthday Phillipe Chabot is told that his brother-in-law has hired him to be a voyageur. He will be paddling west from Montreal to Grade Portage to trade supplies with the Indians for furs. He is overjoyed and receives all the appropriate clothing from his family as birthday gifts, even a tobacco pouch.

As the loaded canoe brigade gets ready to leave, his cousin, Jeanne, accepts the proposal of marriage yelled at her by the clerk who is going along to keep track of the trading.

Unfortunately, disaster strikes the brigade as the men paddle the rivers, make their portages, and get onto the sometimes violent and unforgiving Lake Superior. In Montreal, the city is ravished by a fire and many residents perish before it is extinguished.

It was still dark in late February when fifteen-year-old Phillippe Chabot and his younger brother, Jean-Luc, left the warmth of their house and headed out into the cold winter air to do the morning chores. Their breaths immediately vaporized around them. To keep warm they wore coats made from deer skins which came down over their breeches, and their footwear was high moccasins. They hurried as they poured the water over the milled grain then dumped the slurry into the troughs for the pigs in the pig pen and the chickens in the coop. Jean-Luc checked for eggs while Phillippe went and threw hay over the fence for the cows. By this time, their father, Louis, was in the barn with the milk cows. They joined him and each one milked two cows, setting the wooden pail aside when it was full.

It was dawn when they turned the milk cows out of the barn to join the others and carried the pails of milk into the house. They set them in a corner so the cream could rise to the top. They removed their coats and hung them up by the door.

The kitchen and common room combined took up most of the space on the ground floor of the house. Black pots and pans, and large kettles were stacked on shelves built into the wall beside the huge fireplace which was along most of one wall in the kitchen. On the other side of the fireplace a cupboard held dishes. A table and chairs sat in the middle of the room. In one corner was a spinning wheel, a loom was in another. On a small cupboard beside the door was a bucket of water, a wash basin, and a towel. A lamp hung from the ceiling. Anyone going outside at night took it with them, leaving the fireplace to supply the light in the house.

The only other room on the ground floor was Phillippe’s parent’s bedroom. Phillippe and his brother slept upstairs until the weather got too cold. Then they brought down their beds and put them in a corner of the room, where they now sat, neatly made.

Phillippe’s mother, Bridget, was baking a sipaille on a grate over the fire. It was a casserole of layers of meat, fish, vegetables and herbs separated by pastry and was perfect for a large family gathering.

“Come, eat,” Bridget said, dishing up their breakfast of hot wheat pancakes and bread. On the table were a pitcher of milk and bowl of sugar.

The four sat at the table. After Louis said grace they each covered their pancakes with the milk and sugar and ate.

Phillippe lived on a farm which had been in the family for three generations. In the 1600s, to populate the country known as New France, seigneuries were granted to prominent men, most of whom lived in France. The Saint Lawrence River was the main means of travel in New France so the land along the riverfront was divided into long, narrow strips which were the seigneuries or farms. When the seigneurs came over to live in New France, they brought peasant families to work plots of the seigneuries.

The average plot size of land was twenty-seven acres. This was enough for the peasant’s family to live in relative comfort with their livestock. They did not have the man or animal power to work anymore land than that.

During the winter the outside chores consisted of feeding the livestock and getting firewood from the pile. The women spun wool, sewed clothing, knitted socks, mended worn clothing, dipped candles, and made soap, rugs, and quilts. The men made furniture for their homes, repaired anything broken, or did some woodcarving.

Education was for the elite who would become the professional and trade people in commerce. The only teachings the children received was from a parent who had been educated and since many peasants were mainly illiterate, there was not much learning from generation to generation.

Luckily, Bridget had had some schooling and she taught her children the rudiments of spelling, writing, and numbers.

Life on a farm was not easy. Each peasant, or habitant as they liked to call themselves, had to make enough money through the sale of his grain and vegetables to pay his rent and give tithes to the church. He also had to produce food for his family for the year, and have enough grain seed left over for the next year’s planting. The seigneurs had mills on the land so the habitants could grind the wheat or oats they grew for their own use. The habitants, though, had to pay for the use of the mill.

Phillippe’s grandfather had come over from France as a peasant on one of the seigneury. Wanting his own land, he joined the fur trade and saved every cent he earned. He found land for sale a half day horse ride from Montreal that the seigneury had not cleared nor had found habitants to work. He bought it, cleared it and planted wheat, oats and a huge garden.

The large house, which had been built at the beginning of the century, was made of stone picked off Phillippe’s grandfather’s land. The walls were thick and lime had been used to fill the cracks between the stones. But because the lime absorbed moisture from the rains, the outside walls were covered with wood sheathing. The roof, made of overlapped boards had a steep pitch to it to keep the snow from building up during the winter. A long ladder was built from the edge of the roof to the peak beside the fireplace. Many a time Phillippe had to climb onto the roof to put out a fire in the chimney, which had also had wood around it to protect the lime.

There were four windows, one on each side of the house. When the house was first constructed, greased paper was used to let the light in. Glass for house windows was not available in New France until the 1740s and now each window had twelve small panes in it. There were two dormer windows in the roof for the rooms upstairs. Phillippe had heard stories about when the attic had been used by his grandfather to store grain before his father, Louis, and Uncles Etienne and Pierre were born.

Phillippe remembered his grandfather as having a long white beard and a gravelly voice. He sat on his knee and listened to tales of his life back in France and his few years in the fur trade. This had planted a seed in Phillippe’s mind. That seed had sprouted into a full desire from listening to his Uncle Pierre’s stories of his adventures paddling west to trade with the Indians.

Phillippe’s grandmother, who had come from France as a maid and then met and married his grandfather, died before Phillippe was born. His father described her as a small woman who really was not made for the rugged life to which she had come.

Phillippe’s father, being the oldest son, inherited the farm when his father died. He had cleared more land and increased his crop output until the family was one of the wealthier farm families in the area.