Sign UpLogin
You are here: Home / Books / When Fate Decides-Challenge the Heart Book 1

When Fate Decides-Challenge the Heart Book 1 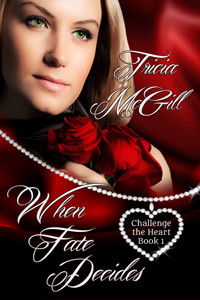 For too long Tessa has seen herself as plain and dowdy, just an ordinary suburban housewife. With her confidence eroded after being married to a bully who humiliated her at every opportunity, why wouldn’t she presume she was unattractive, and someone no man would find the least bit worth bothering with?

But now Tessa is a widow, and relishing her new state of independence. Her world is turned upside down by Jack Delaney, a man she spent hours fantasizing over when he worked for her husband. A man who gave her a deliciously secret outlet from her miserable marriage. When Jack enters her life again, professing he finds her attractive, why would she believe him? Especially as he is now wealthy, successful, still extremely handsome, and to add to that, years younger than her.

She was blushing again. Christ! If it happened too often he would fall apart. Could she be such a delightful shade of pink all over? With a sharp silent reprimand, he told himself to keep it cool. If he wasn’t careful he could frighten the life out her.

“I’d rather not have another. But you go ahead and help yourself.” She nodded as she picked up the tray.

Jack followed Tessa to the kitchen and, while she started to get a saucepan from the cupboard he refilled his cup, then leaned back against the counter to watch her.

“Am I in the way? Just tell me to go jump if I am.” Could he be making her nervous? Was that a tremor in her fingers, or simply his own awareness playing tricks on him? She shook her head and, with an endearing little smile, carried on.

His gut clenched. “So, your daughter’s sixteen. Is she a problem teenager?” Perhaps as stupid question but he desperately wanted to set her at ease. He loved the sound of her voice, and could listen to it all day. It was soft as a summer breeze, with a slight huskiness to it. Made a man think of forbidden things, like sultry nights of passion and sweat-sleeked bodies.

Her warm smile told him she adored her daughter. “Laurel a problem? Heavens, no—I couldn’t wish for a better daughter.”

Jack pulled his thoughts back to the mundane question he’d asked. “You must be one of the lucky ones. I have friends with teenagers who reckon they are a pain in the neck.”

“I am lucky.” She frowned as she said that. “Des was like your friends—inclined to look on girls as not worth the bother it takes to raise them.” As if she regretted being so outspoken, she bit her lip before she turned her back on him.

Jack couldn’t imagine dear old Des being the kind of father a girl would enjoy having. He was far too dogmatic and unbending. Too mean and nasty to have the sensibilities needed to rear a daughter.

“Laurel wants to be a nurse.” Her smile had returned when she turned back to face him. “She’ll be a good one too. Her dolls have been her patients since she was a toddler. Every one of them sported a bandage on one limb or other since she was old enough to wrap it.” Pride shone from her eyes. “I think she’ll probably want to go overseas to help the refugees or displaced people. She has a very compassionate nature.”

“Is she as beautiful as her mother?” Damn! Now she’d gone all wary again, but her blush told him his revelation pleased her.

Laughing nervously she eyed him across the small space separating them. “Don’t be daft.”

“Daft to think anyone could be as lovely as you, you mean?” With a grin, he watched the peachy stain travel from her throat and up her face. God, she was endearing.

She gave a soft snort as she held a spoon aloft. “You should see about getting glasses.”

“My eyesight is perfect.” Fascinated, he watched her movements. Yes, she was flustered for sure. “Surely Des told you how lovely you are. And there must have been many men over the years that commented on it. Unless they are the ones who needed glasses.”

She emptied a packet of spaghetti into boiling water as she protested, “I’m a past her prime mum and my hair’s going gray.”

Jack made a rude sound. “Rubbish! Past your prime? You have the face and figure of a twenty-year-old, Tessa. Your skin’s like silk, and I happen to like the touch of silver in your hair.” Would dearly like to see if her skin felt as soft as it promised to be. Itched to run his fingers through that sleek hair.

“How did we get onto this subject?” He couldn’t quite make out if she was embarrassed by his bluntness or pleased at his compliments.

“Well, mainly because I was commenting on your beauty and you were arguing with me.” Now he knew she was pleased with his observations—her flustered movements gave her away. Obviously he was right—she just wasn’t used to having someone tell her she was lovely. “How do you keep so slim?”

“I walk the dog every day as well as doing exercises. And I do Tai Chi regularly.”

“Really? I’ve always wanted to have a go at that? Where did you learn?” He watched as she stirred the pot. A delicious smell rose from the sauce she’d poured in.

Her eyes went wide. “I went to the local community center. You’re kidding me, right? I can’t see you doing anything so sedate.” A small sound of disbelief left her lips. “I would reckon karate would be more in your line.”

“Funny you should say that.” Jack nodded. “I did start learning after my marriage flopped. It was one way to get the anger out of my system.”