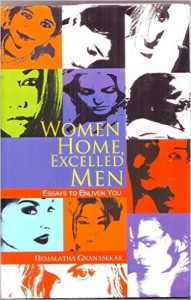 Change, it is said is inevitable  !  Moreso,  this being the age of internet, we seem to be struggling a lot to keep pace with the new developments taking place around us.  However, the good values that we learn from our elders never change and remain the same down the ages.  In my book, “Women Home Excelled Men”, I have written sixteen essays about the lessons I have learnt in life when I was a young girl.  You will come to know about my struggles with integrity in trying to speak the truth, no matter what ;  about the country doctor who taught me how to take things as they come, my realization of what beauty is all about, the true value of money, about contentment  and how at times, we have to step down from adulthood and let the child in us peek out.

The essays are written with humour and sensitivity.  Each exploration captures the essence of seeking reasons for doing the things that we do, whether it is letting the child within us peek out once in a while or the realization of certain truths about ourselves.

The essays are everyday happenings, though unimportant, yet lend a moment of deliberation and leaves behind an important lesson, enriching the self.  Truly enlivening, it is chicken soup for the soul !

It was a very small gathering of devout people.  All around there was unusual silence and the children too watched the action avidly.  The pujari was performing abhishekam to the goddess in the sanctum.  First, he poured a bucketful of milk over the goddess, followed by a thick paste of sandalwood and a pot full of water.  Again, he took a bucketful of mixed fruits and offered it to the goddess.  Finally, he rinsed everything off with water brought from the stream flowing near the temple.

The abhishekam complete, he began to embellish the goddess with a beautiful silk cloth and bedecked her with kumkum and flowers.  Then, he performed arti with burning camphor in front of the goddess, while the congregation chanted prayers which sanctified the atmosphere.  Some of the people gathered there explained the powers of the goddess to those who were not aware of it, speaking in hushed tones.

An old woman advised her granddaughter to pray to the goddess with folded palms, when all of a sudden, the child enquired aloud, “But where is the goddess ?”  The question put forth by the little girl, induced laughter and the serious mood which prevailed turned to a jovial and relaxed one.

This was the first time I was visiting the temple and my mind was also occupied with the very same question that the child had candidly asked.  For all that was to be seen was three black stone pillars, for which all the elaborate rituals were performed.  And I waited eagerly for Grandma to clarify the doubts of the little girl.  But Grandma only chided the girl for her outspokenness and threatened her that such questions would arouse the wrath of the goddess and she would pierce her eyes with a long spear.  Immediately, I closed my eyes and mumbled a prayer.   I was rather impressed by the love and devotion the people bestowed on a mere black stone pillar revering it as a powerful goddess.  It showed the intensity of faith people have in God!

The fear of God has been inculcated in me since childhood.  I had also been taught that God is present in each and every speck of the universe and that He is Omnipresent, Omniscient and Omnipotent !  Though I believe in this concept of God, there is a slight variation in my conviction.  I see God only in the people who come to rescue me or help me out in times of danger or distress and trust they are sent by God.  To some extent, I am of the opinion that God exists in the people around us.  But to consider His presence in an inanimate thing as a stone or tiny particle is beyond my comprehension.

I was thus reminded instantly of a man whom I had come across during my school days.  When the assembly prayer was being sung, he would pass by the road carrying a bag in each hand.  It was his time for shopping and his bags would be full of vegetables or provisions.  After walking a few paces, he would put his bags down.  Folding his palms together, he would mumble a prayer to the Sun God, looking up at the sky.  Then, after humbly bowing down, he would continue walking.  After a couple of minutes he would repeat the same actions.

We had strict instructions to close our eyes while singing the school prayer.  On days, when there was no teacher spying nearby, out of curiosity, I would try and peek to count the number of times that man stopped to offer his prayers to the Sun God, until he disappeared out of view.  After seeing the vehement faith that the people bestowed on a mere black stone pillar, my opinion that he was insane, changed altogether.  May be this man revered his God to a great extent, and he saw Him in the form of the Sun !

Once, while I was on my way to my sister’s place, I saw a large crowd gathered on both sides of the road and our car could not proceed.  One of them told us that the road was closed to vehicles for another one hour as a religious procession was to pass by in a short while.  After parking our vehicle, we decided to join them.  Had it been any political procession, I would have asked my hubby to take a different route, but since it was a religious one, I waited to see it.  It had been a long time since I had witnessed such a religious procession.

During the summer vacations we would go to our grandfather’s village.  There were many temples there and religious processions were quite a common affair.  The god or goddess of different temples would be taken out in a procession.  There were special carts meant to carry the statues of the gods.  Generally, when the procession reached Grandpa’s house, it would halt for a considerable time, and we would offer flowers, coconuts and fruits to the pujari and a special puja would be performed for us.  Then as the bullock cart moved on, a small band would follow, playing the drums and singing bhajans.  This would be then followed by a troop of men wearing masks of horses and walking tall with false horse feet, or dancing all the way accompanied by the bursting of crackers.

Stages would be set-up near the temples for enactment of dramas, usually scenes from the epics of the Ramayana and Mahabharata.  Though I would understand nothing of the epics, we children would keep lingering around the temple throughout the day, admiring the actors and actresses doing their make-up.  At midnight, when the drama began, people would squat on the vast stretch of sand and watch with keen interest.

After Grandpa passed away, our trips to the village also stopped.  Since then, I had missed the joys of participating in a religious congregation.

Now looking around, I found the same kind of excitement in the air.  People from far off places had come all the way to witness the procession and they were thrilled to be there and waited with bated breath to see the procession pass through.  Seeing the joyous and gay mood prevailing all around, I became all the more inquisitive to know more about the kind of procession that was to pass by.

Suddenly, the crowd stilled and an air of expectation filled the air as everyone’s attention was turned to the procession visible at the corner of the road.  As the procession slowly moved closer, I was enthralled by the spectacular scene that I saw.

The first to emerge in the sequence was an autorickshaw towed by a young boy of twelve.  A small incision had been made on his back below the nape, and an iron hook had been inserted through the slit.  A thick rope was tethered to the hook and was connected to the auto.  Also, a sharp metal spear passed through his perforated tongue.  He tugged the suto slowly, steadily and effortlessly.  There was no hint of pain on his face and he was accompanied by his family members, who trotted beside him, chanting the name of their beloved goddess.  This was followed by several other autos, towed by different men, single-handedly.  Some of the autos carried people too, and they were all effortlessly hauled leaving the onlookers spellbound.

In a short while, we were to observe an even more horrific scene.  It was the towing of lorries.  Each lorry was pulled by three men.  Each lorry was pulled with the help of thick ropes secured to hooks on the men’s backs.  At the four corners of the open lorry, pillars were erected and a temporary ceiling – a framework of metal bars – was fabricated.  On these metal rods were fixed a number of hooks from which metal chains dangled.  These metal chains were fastened to the hooks embedded in the bodies of the men who hung vertically, horizontally and upside down from the framework of the metal bars.  In some of these lorries the relatives of these men were seated, applauding and inspiring them !

The sight of the hooks tearing into the flesh, left one horrified.  In one particular lorry, a man hanging horizontally from the metal bars with face down, had a cradle bound to the hooks on his chest and a few onlookers got their newborns blessed by placing them in it.  It was a sight that sent a shiver through my body and also moved me to tears.

This unique procession of towing of autos and lorries by human beings continued for more than an hour and we stood there agape beholding the sublime feat of these strong-willed men, unmindful of the passing of time.  Surely, some miraculous power must be sustaining them,  during this ordeal !

This deed, beyond doubt, was the culmination of love and reverence towards their goddess exhibited in the most weird form, and it left an indelible impression on our minds.

This stupendous act of piercing and slitting of  their flesh to glorify their goddess, shows the sublime heights that man can transcend to get nearer to God.  Undoubtedly, an atheist viewing the spectacle, would have second thoughts on the concept of God and certainly change his mind !