Sign UpLogin
You are here: Home / Books / A Comedy of Terrors

A Comedy of Terrors 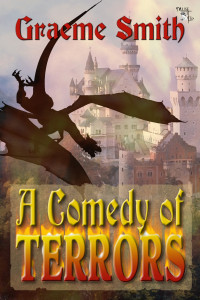 Segorian Anderson’s an Idiot. But that’s fine with him. It’s a well paying job with no heavy lifting.

Nobody ever remembers Segorian. It isn’t magic – he just has the sort of face his own mother could forget, and she’s been trying to for years. But being forgettable is a job requirement for an Idiot.
No, he’s not the Court Jester. He doesn’t wear motley (whatever motley may be). That’s a different union. He’s the Idiot. In a Queen’s castle, wine spilt down the wrong dress can lead to war, so someone unimportant has to be blamed for it. That’s the Idiot’s job. He’s the Idiot that did it, for any value of ‘it’. Of course, as soon as he’s exiled-for-life out of the castle gate, he uses his back-door key and sneaks back in. But that’s not all. Someday, something really bad will happen. Really, really bad. Badder than a bad thing on a very bad day with extra badness. When the world’s about to end (or the washing up won’t get done – whichever comes first), who you gonna call? No, not them. They haven’t been invented yet. You call the Idiot, someone nobody will miss if things don’t work out. And now Peladon has a case of dragon.

But the dragon may be the easy part. Segorian has woman trouble, and he’s the only person in the castle who doesn’t know it. Because to Segorian, women are an open book. The problem is, he never learned to read.

Allow me to introduce myself. I’m an Idiot.

This wouldn’t be news to anyone who knows me, apart from my mother. She believes me to be an incredible idiot and would be amazed I’d been able to improve to just ‘idiot.’ Her view is probably more accurate. She’s known me even longer than I have.

If I’m going to be totally honest (a bad habit I’m trying to break), Idiot is only one of my names. To the Elves, I’m ‘Oh-god-it-eez-eem-aygayn’. To the dwarves I’m ‘Bugger-lock-thedoor-and-keep-quiet-he-might-go-away’. To the Halflings—actually, I don’t know what the Halflings call me. I can’t ask. They have a restraining order, and really good lawyers. With writs—writs with nails in.

But still, I’m an Idiot. And not unhappy with that. It’s a well-paying job with no heavy lifting.

Job? Sorry. I can see you’re confused. As you can tell, I’m not very good at this. Let me start again.

No. I’m not the Jester. Not the Fool. I don’t wear motley (whatever motley may be) and I don’t tell complicated jokes nobody understands, giving me an excuse to bash them on the head with a pig’s bladder. Besides, that’s a different union.

Whenever something goes wrong, there has to be somebody to blame. When a visiting dignitary has wine spilled down their tunic—some idiot spilt it. When the generals lose a battle—some idiot read their plans wrong. When the Royal Pageant starts out on a bright sunny day, and the bright sun turns to dark clouds, and the dark clouds to hissing pouring…oh. I forgot. Nobody cares about the weather report. Anyway. Some idiot wrote down the wrong day in the Royal Calendar.

When the call comes, the Queen’s people pull out something relevant—a servant’s tabard, perhaps a Colonel’s uniform—and I go to my duty. I stand where I must stand. Some people shout at me for a while, and I’m banished from the Kingdom forever for my grievous sins. The offended parties feel vindicated, and nobody important has to suffer unduly. I accept my exile, at least as far as the back door to the castle, and then I slip back inside. To wait for the next time. Because everybody needs an Idiot.

Like I said, it’s a well-paying job. And no heavy lifting. Or it was. Until the dragon…