Sign UpLogin
You are here: Home / Books / A Head in the Game

A Head in the Game 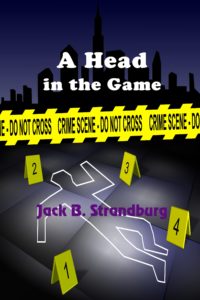 Chicago Homicide Inspector Aaron Randall faces his toughest case while dealing with doubts about his career and the potential of a romantic relationship.

Jared Prescott, a Heisman Trophy winner and Vice President of a large and respected pharmaceutical company, is found murdered at a seedy motel. The investigation uncovers multiple suspects with multiple motives. When the body of his close friend and informant is found stabbed to death in a deserted alley, followed by the murders of two women, Randall suspects a conspiracy.

Randall is hamstrung during the investigation by pressure from the commissioner down the chain of command because the president of the pharmaceutical company, anxious for resolution to Jared Prescott’s murder, is a close friend with a Senator whose sights are set on the Oval Office.