Sign UpLogin
You are here: Home / Books / A Heart in Conflict (Challenge the Heart Book 2)

A Heart in Conflict (Challenge the Heart Book 2) 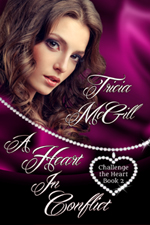 Opposites attract, it is a well-known fact. At times this leads to insurmountable conflict, when at other times, sit back and watch the fireworks.

Steve Tanakis considers himself cool and calmly confident. Head of a fashion business, he needs to be in control of his life and his business decisions. He decides it is time to find a suitable mother for his son. Through with the pain that comes along with passion, he now considers what he wants is an unemotional wife, one who will fit well into his way of life.

Georgie McNamara, assistant designer in his fashion house, is flamboyant, vivacious, and gregarious, the antitheses to his idea of the perfect choice. The tiny whirlwind turns Steve’s organized lifestyle upside down, somehow worming her way into his, and his son’s life, foiling all his plans to find that uncomplicated wife. Along the way Steve comes to realize there is a lot more to this bundle of feminine trouble than he first thought. Is she more trouble than he can handle?

“I need to get married.” Steve Tanakis gazed into his half empty glass.

“And why the hell would you want to do that?” His accountant stared at him.

“Aha.” David grinned. “Take mine. Or—a better idea—take one of my three exes. They’re screwing the last dollar out of me.”

Steve made a soft sound of disgust. “Don’t tell me you’re thinking of ditching Marylyn.”

“The woman drives me nuts. The piranha is hell-bent on making me a pauper, what with her passion for diamonds and cars! And those other bitches…” He cursed softly.

“The trouble with you is that you’re too much of a romantic. You expect too much of your women. You marry without putting any real thought into it, then spend your days regretting your haste. There might be a good business mind ticking over inside that head of yours—” Steve tapped his temple. “—But where women are concerned you’re a fool. Now, what I propose is to find myself a perfect example of womanhood.”

David laughed. “Oh, so as you obviously haven’t found this paragon yet, I take it Marika isn’t in line as the next Mrs. Tanakis?”

Steve looked across to Marika, who was talking to his head designer, her every gesture manufactured to draw the attention of all the males present. Most women would do just about anything to have a figure like hers. The epitome of sophisticated elegance; diamonds glittered at her throat and fingers.

“Marika! Heaven forbid. Beneath that luscious package beats a heart of stone. That one is a perfect mistress, but not exactly what I’m after in a wife.” Steve took a swallow of his whiskey. “I’ve got it all worked out. I need a mother for Jimmy. He’s twelve and getting to that uncontrollable stage. But this wife needs to be cool and controlled. I don’t want an emotional woman. Granted Marika fits the bill, up to a point, but—” Steve nodded to the woman in question, “—Jimmy doesn’t like her, which causes a slight problem. My son comes first.”

“Good God, man. What about passion and love?” David swigged back his whiskey.

“Love!” Steve’s mouth twisted. “That’s your problem.” He pointed at his friend. “You’ve been searching for an elusive quality. Getting married has nothing to do with passion. Now if you’re talking about sex.” He grinned. “That’s entirely another story. I’ve given this a lot of thought. I’ll never care for a woman deeply again. It only leads to pain.” More pain than he was prepared to suffer. No, his plan of gaining all the benefits of a wife without the agony that went along with passion was much better. “And in your case poverty.”

David sighed. “Perhaps your right.” He helped himself to another drink off the tray carried by Steve’s housekeeper. “Anyway, you have Mrs. Fisher there.” He nodded at her plump backside as she walked away. “She keeps your house immaculate, and she’s less trouble than a wife.”

Steve looked to the ceiling. “I wouldn’t part with Grace in a fit. She’s great with Jimmy. I want more kids. I’ve reached the conclusion I’d be better off without all the emotional baggage. I want someone to share the same interests and outlook as me, but don’t want someone who will disorganize my life. I want an uncomplicated marriage.”

“Uncomplicated!” David swore softly. “There isn’t a female alive who can give you that.”

“I’ll find one to suit. There must be plenty of women out there who’ll fit the bill.” Steve glanced at his friend, but David’s attention had wandered to a petite, flamboyant creature, with a wild mane of highlighted brown hair and oriental eyes, who was drifting from Steve’s living room with feline grace, a tall glass in her hand.

David gestured her way.  “Who’s the snazzy little number in the floaty outfit?”

“That’s Georgette McNamara, my new assistant designer. She started out as odd-job girl and worked her way up through the ranks. I’ve just promoted her.”

“So, that’s why I’ve never seen her at one of your Christmas dos. She’s quite a looker! Shame about the clothes.  But I have to say, not many women could get away with wearing that creation and still look so sexy.”

“Georgie certainly likes striking clothes.” Steve held up a finger and wagged it. “Keep your lecherous thoughts away from her, mate. She’s too young for a degenerate like you.”

David glared at Steve. “I may be an old married man, but I’m not dead yet!”

What a bore! This couldn’t be called a party. Georgie sipped her mineral water and wandered out to the spacious lobby. Her boss’ mansion was a dream, but she would prefer to see it furnished with more dash and colour.

Steve Tanakis’ decor was too austere, the house and gardens just too immaculate. The house where she shared a bed-sitter with her sister Lucy was almost as huge as this one, but was in dire need of repair, its small garden unkempt.

Oh to be rich. Not that she lusted after money. Her sister Lucy resented their poverty more. But a feeling of something akin to desire kindled in Georgie’s breast at first sight of this house. Which was silly, how could you fall in love with a pile of bricks?

As easily as one could fall for its owner, she guessed. Georgie had covertly watched her boss since arriving here. In fawn shirt and dark trousers that hugged his long legs Steve looked exactly what he was—a very successful businessman, sure of his niche in the world.

One day she would be just as much a part of that world of high fashion. Georgie paused to peer up at the cluster of exquisite light fittings. The hall-table bore a vase of carefully arranged lilies and carnations.

Placing her glass on the table, she looked up when someone called, “Hi, come up here.” Her employer’s son sat on the top step of the curving staircase. Georgie did as he suggested, settling at his side.

He grinned, reminding her of a playful puppy. “Aren’t you enjoying the party?”

“Party?” Georgie’s brows went up. “This isn’t a party my friend.”

“You’re Georgie aren’t you? Funny name for a girl. It’s a boy’s name.”

“Well,” she explained patiently. “It’s a shortened version of Georgette. My sister couldn’t get her tongue around that when she was small so Georgie stuck. What do I call you?”

“Jimmy. How old is your sister?”

“Do you only have one?” He tilted his head. “Got any brothers?”

“Nope. There’s just the two of us. Our parents died three years back.” Georgie stared at her feet.

“Like dad and me. There’s just us two.” He looked through the banisters to where the housekeeper was carrying another tray from the rear of the house. “And there’s Grace. She’s looked after me since my parents were divorced.”