Sign UpLogin
You are here: Home / Books / A Murder State of Mind Trilogy

A Murder State of Mind Trilogy 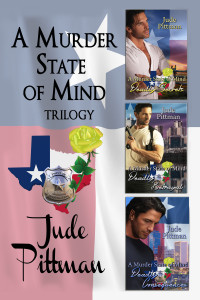 A Murder State of Mind Trilogy

Deadly Secrets: A retired cop who suffered a personal tragedy is coming to grips with his grief and considering returning to law enforcement. That decision escalates when he finds a friend murdered. Coincidences, the emergence of a secret life, a treasure, an heiress searching for her birth mother and the ulterior motives of some regular citizens all have Kelly McWinter scrambling to uncover the truth before his best friend ends up behind bars.

Deadly Betrayal: With his new PI license, and an arrangement to help out Augustus Graham at the Fort Worth PD, whenever needed, Kelly McWinter is back in the saddle again. Just in time to catch a call from good friend Stella Davis. Stella’s niece Marcy is an up and coming young singer from Nashville and she’s pregnant. The married lover is a playboy named Alex Wyatt and Stella’s afraid Marcy is about to get hung out to dry. Kelly agrees to look into the case and heads for Houston to meet up with Stella.

Deadly Consequences: Two Texans, Cam Belscher and feisty redhead Stella Davis have picked a remote lodge in Oregon to tie the knot. Flash forward to the middle of the night. The sound of lodge owner Bubba Tate banging away on the cabin door is enough to put a damper on any honeymoon, and when the reason for Bubba’s late night intrusion turns out to be murder at Gillian’s riding stable in Fort Worth, the wedding trip is over. Don’t miss this third and final volume of the Kelly McWinter PI mysteries.

“If you like happy endings, then this is a good set of books to read. Each is good as a “stand alone”, but as a set they are even better. Set in Texas, the books follow several well developed characters in a well thought out story line. I enjoyed following Kelly and his dog Jake through the healing process of losing his wife and the adventures he seemed to always find himself involved in. The characters seemed real to me and the setting was one that I wouldn’t mind living in. All in all this was a fun light read and caused me to chuckle several times along the way. I enjoyed the mystery element and trying to figure out “who done it”. Hopefully Jude Pittman will continue writing with these characters. It would be fun to see what would happen next.” ~ 4 Stars, Oregon Dreamer, Amazon Verified Purchase

“Very well written, funny, sexy and mysterial, what more can you ask for! I like the every- day settings as well, something you can find in real life. All in all, very normal stories by a good story teller.” ~ 5 Stars, Gitte, Amazon Reader

Kelly McWinter strode into the squad room of Fort Worth Special Ops. Except for the slight hitch in one of his long legs ‑‑ compliments of a gang banger who didn’t appreciate having his meth lab shut down ‑‑ you’d never know the lanky Texan with the crooked smile and barely definable dimple in his chin, was a 13 year veteran of the Fort Worth PD.

“All set. Got the warrant right here,” Dan Gallows patted his jacket pocket and picked up his automatic rifle.

“Command Central confirms there are four of them. Two in the front of the house and two back in the lab. They’ve only been cooking since noon, so they’ll have to stay put the rest of the day.

“Okay.” Kelly fastened his vest and buttoned up his jacket. We have two squad cars on standby they’ll pick us up at the corner of Belknap and Knight and follow us to the clubhouse.”

“We going in quiet?” Gil Martin asked as he stepped up beside his Chief.

“Dead silent. Remember, they’ll be heavily armed and they aren’t likely to go down easy.”

Luckily the takedown went smooth as butter. They hit the clubhouse hard and fast, took all four by surprise, and never fired a shot. Gil and Dan crashed through the front door at the same instant that Kelly and Jeff Steuben from Patrol came through the back. The guards up front were having lunch and the two cooks in the back were sitting at a table playing cribbage. The Team had them down and cuffed before they could clear their heads enough to know they’d been breached.

Three weeks after the raid everything went to hell and Kelly’s life exploded in a nightmare of flames and gut wrenching grief.

Someone leaked Kelly’s home address to the bikers. They staked out his apartment and on a night when both Kelly and Lynda should have been attending a surprise party to celebrate Kelly’s mentor, Jim Forbes’ retirement from the force, they’d thrown a barrage of Molotov cocktails through the bedroom window. Kelly and Lynda had both planned to attend, but a couple hours before time to leave, Lynda got one of her migraines. Kelly had been torn between staying home with his sick wife and paying tribute to his mentor, but Lynda had insisted he attend the party. She’d already taken her pain medicine and by the time Kelly left she’d been sound asleep. He went alone.

Later, when he got the call to come home, the apartment building had burned to the ground. The fire chief told Kelly that the explosion had killed Lynda instantly. She’d never awoken and felt no pain. It was small consolation.

In the aftermath of the tragedy, Kelly resigned from the force, cut off all contact with his fellow officers and took a dead end job working security for a country flea market out in Indian Creek. He’d been there five years when murder brought him face to face with his past.