Sign UpLogin
You are here: Home / Books / A Savage Exile: Vampires with Napoleon on St. Helena

A Savage Exile: Vampires with Napoleon on St. Helena 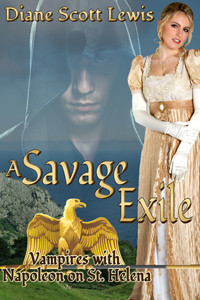 Isabelle, a young French maid, follows her notorious mistress to the island of St. Helena after Napoleon’s defeat at Waterloo. She discovers quickly that a “beast” roams this remote island, and people are vanishing or found drained of blood. She falls in love with Saint-Denis, Napoleon’s valet, but this enigmatic young man hides a deadly secret. Hudson Lowe, the island’s governor—a vampire himself—plans to destroy the French. Isabelle rushes with her lover to stop the vicious outcome, and save her own life.

Hudson Lowe entered Plantation House, his Georgian residence in a pretty hollow, up the cliffs from Jamestown, and removed his coat. A servant dashed forward to take it. Lowe entered his parlor and poured a glass of port, the sweet wine a poor substitute for what he really desired.
This new prisoner he was saddled with—a scoundrel his country had been at war with for twenty years—would only make things complicated. The world, as much as they could in this remote location, would now intrude on his privacy, his coveted getaway. Saint Helena was now under martial law. Lowe gritted his teeth.
“I suppose you saw him?” His wife entered, wearing one of her preferred low-cut gowns. A little too “flaunting” for his tastes, but she carried herself well.
Lowe smiled, smoothing over his frustration at these startling events. With the slowness of news here, they’d only had a few weeks to prepare. “No, I arrived too late on the wharf. He was below, I was informed.”
“He’s a hideous man, I’m certain.” Susan smiled in return. A tall, attractive woman, and previously widowed, he’d married her the year before being assigned as colonial governor of St. Helena. “I’ve heard he has horns and a tail.”
“We’ll soon see. I’ll visit when Bonaparte is given his permanent dwelling.” Lowe poured her a glass of wine. He admired, as always, her thick, brown hair, bright eyes and very pretty neck.
“I suppose you must be polite to the rogue.” She took the glass and sipped, her pinky raised. He’d heard the servants whisper she was a prima-donna who, at age thirty-five, wore too much rouge.
“I must play the diplomat, of course.” Lowe caressed her shoulder, watching a vein throb in her throat. His innards clenched, but he breathed deeply. “They wanted to give him Plantation House, but I objected. The air is perfect here, and I look out for your health.”
“Put him somewhere dismal.” She waved a hand in the air as if she conducted a choir, leaving a scent of Jasmine. “On the other side of the island if possible.”
Lowe glanced around the well-appointed room with its richly paneled mahogany walls and green velvet drapery. The furniture was shipped from England, and expensive. “As far from us as I can manage, my dear.”
“Excellent. You must always put me and my daughters first.” Susan finished her drink, kissed him on the cheek, and left.
Lowe appreciated his wife’s daughters from her previous marriage. They kept Susan occupied and not so nosey in his affairs. His wife was a self-involved woman, which also helped. He swallowed down more of the sweet beverage, his taste buds unsatisfied.
He fisted the delicate glass. Back to his current conundrum. Why did his government have to ship the scourge of Europe to his island? A firing squad for the Corsican ogre would have been better.
Lowe’s career had led him to many islands, including Elba and Corsica, as if he’d followed in the footsteps of General Bonaparte. Now Bonaparte followed him here. Outrageous! He’d managed his business on the other isles, but St. Helena was perfect for his needs. So remote, a thousand miles from the nearest land, and the abundance of slaves here never counted in any ledger.
Lowe licked his thin lips. He returned his glass to the sideboard, avoiding the cheval mirror that hung over the mantel. He knew his visage wasn’t handsome, not that he’d be able to view himself clearly. His hair was rusty colored with streaks of gray, his face long and bony. But he’d wooed Susan, hadn’t he? Even if she’d been penniless, she did have fashionable connections.
However, more important matters churned in his mind. He must curtail these French invaders before anyone discovered his secrets.