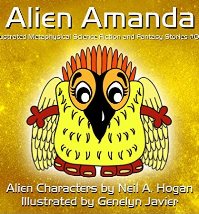 Alien Amanda helps people move between worlds. But she’s suddenly sent a request that shocks her.

Her star is getting hotter and the aliens on two nearby planets want to move to hers.

They’re all so different. How can she get two completely different intelligent alien races to move to her world and live together with the Owlosians in harmony?

Each ebook contains an encapsulated story within the Alien Characters universe and each story features a new character. They can be read as stand-alone titles or in groups of series.

If you’re a parent looking for something new for your child, or a birthday or Christmas present, or something to take along to a child’s party as a present, an Alien Characters book would make an interesting gift. The style of writing is for a similar age group to the Mr Men, Thomas the Tank Engine and Doctor Who children’s books, and makes great bedtime reading.

Books 1-12 introduce a number of characters that eventually band together at a conference in story 13 entitled ‘Alien Sophie’. The Alien Characters series is currently approaching 70 titles, and has a spin-off series for young adults entitled Galactic Mission Series.