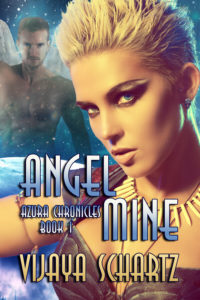 What in the frozen hells of Laxxar prompted Fianna to pursue her quarry to this forbidden blue planet? Well, she needs the credits… badly. But as if crashing in the jungle wasn’t bad enough, none of her high-tech weapons work. She’ll have to go native, after the most wanted felon in five galaxies. It’s not just her job. It’s personal.

Acielon has never seen an outworlder like this fascinating female, strangely beautiful, and fierce, like the feline predator loping at her side. He always dreamed of exploring the universe, despite the legends… and the interdiction. Is it truly a hellish place of violence, lies and suffering? If it spawned this intriguing creature, it must also be a place of wonders, adventure and excitement.

Fianna’s instincts tell her someone is watching. Sheba, her telepathic feline partner, doesn’t seem worried… yet, something on Azura isn’t quite right.

“By the frozen hells of Laxxar!” Strapped in her command chair, Fianna Grosvenor tapped the symbols on the control console.

Emergency sirens blared throughout the hull of her small ship. Red rectangles flashed on the navigation screen.

“Are these the right coordinates? Where is my quarry?”

“The quarry ship does not show on my scanners,” Rapscallion announced in a chirpy voice.

“Triblets!” Fianna immediately regretted the cuss word. “Where is he?”

“Sheba not like swearing,” the voice of her feline companion intruded in her mind.

The large puma ensconced in the clear gel safety globe at Fianna’s side, blew her frustration through dilated nostrils. The feline covered her round ears with wide tan paws. “Sheba not like noise.”

“Sorry, girl. I forget your ears are so sensitive.” An asset in the hunt for dangerous felons.

Fianna glanced up, through the clear titanium pane of the forward bridge. Floating in black space, blinking space beacons linked by red laser lines like a grid, delimited the forbidden zone. Too loose a grid to prevent small ships from slipping through. Not an interdiction but a stern warning. Beyond the grid loomed an oddly luminous turquoise planet.

“Computer, zoom on the planet.”

Three moons, one larger than the other two, orbited in a cluster, but no visible satellites or space stations.

“Then why the warning beacons?” Fianna stared at the screen, fascinated by the planet’s bright turquoise color. “Is the planet toxic? Analyze the color spectrum.”

“So, it’s livable.” Triblets. The low life she was hunting could have taken a chance despite the warning beacons. “Is the planet hostile to human life in any way?”

“Then why is that planet forbidden?”

“Searching.” Electronic chimes punctuated the search. “Azura is quarantined by the Galactic Trade Alliance. Level-three warning in effect. Do not approach under any circumstances. Those who ignore the warning are never seen again.”

“Scanning.” The computer paused. “I detect a recent ion trail dwindling toward the surface, but the planet is shielded. Deep scans cannot penetrate to detect specific objects or people.”

“Shields? But there is no sign of technology.” What kind of planet was that? “Show me the history records for Azura.”

“Minimal records available. They seem to have been expunged.” Images of lush jungles scrolled on one of the side screens lining the command center, but no people.

Rapscallion chimed. “The inhabitants are labeled hostile, dangerous, unpredictable, with powerful, lethal natural defenses but no known technology. They refused to deal with the GTA in the past and forbade the construction of spaceports.”

“That explains the isolation sanctions.” The Galactic Trade Alliance did not tolerate rejection well. “What else?”

“The native’s ideologies of truth telling and reckless honesty would have catastrophic consequences for the preferred way or life of the Galactic Trade Alliance. Costly wars and attempts to destroy the planet in the past have failed. Now it’s off-limits… in quarantine… indefinitely.”

“Wow! Are you telling me that natives with no technology kicked the Alliance’s butt?” Fianna whistled, eliciting an ear-rise from Sheba.

The large cat shuddered in her clear gel globe. “Sheba not like whistling.”

The feline’s coat shimmered then turned from tan to silver gray. Unlike the proverbial leopard, this puma could change her spots… thanks to genetic engineering.

Fianna ignored the feline’s complaint. “No wonder Azura is the perfect place for that bastard to hide.”

Her quarry must have landed there. Fianna wouldn’t abandon the chase because of a silly interdiction based on opposing ideologies. Tarkan had already killed and maimed too many innocents… including her brother. He must pay for his crimes, and this time she’d make sure he remained locked up in a high-security prison.

On the viewer scanning the planet, something caught the sunlight and flashed it back into space. It flashed again.

“What was that? A signal, or a reflection? If there are shiny, reflective surfaces, there must be some kind of technology. But if there is no technology, then it can only be Tarkan’s ship. He escaped in a silver luxury yacht.”

Fianna checked the coordinates on the console. “Computer, plot a trajectory to land in the same spot as that flash of reflected light.”

“But, Captain, the beacons warn against approaching the planet! Those who ignored the warning never returned.”

“Oh, shut up, you arrogant agglomerate of integrated circuits.” Fianna would have to fine tune Rapscallion’s obedience routines. “It’s not the first time we break the rules. You are not my conscience. Just land your butt where my quarry landed.”

Fianna hated computers with an attitude.

Fianna muted them. “Ignore the beacons and stay true.”

Fianna would also have to reduce Rapscallion’s sarcastic abilities.

The small ship glided through the loose grid into the forbidden zone. The surrounding beacons quieted and returned to sleep mode. Apparently their scanners only looked outward to warn. They did not interfere. And her quarry must have known that.

As the ship approached the planet, Fianna detected a shimmering rainbow shell, unlike anything she’d ever seen before. “Shields? What’s their power source?”

“Unknown,” Rapscallion droned in its monotone voice. “It could be dangerous to get any closer. I… feel… dizzy…”

“Dizzy?” As if a computer could feel anything.

The ship’s emergency lights flashed red and blue on the bulkheads all around the command bridge.

Sheba, in her clear, gel-padded globe, covered her eyes with her paws. “Sheba not like blink.”

As if the feline had powers, all lights went out and the dull vibration of the engines ceased. Blackness enveloped Fianna. No LEDs, no emergency lights, no forward viewer. She felt strangely light. No gravity either. She blinked to activate her internal night vision. The outlines of bulkheads and consoles emerged in muted colors. The angel statuette floated in front of her, demagnetized from the console. Fianna grabbed it and stuffed it in her cargo pants’ pocket.

The ship wobbled, then some gravity resumed, but speed increased. Triblets! “We are being sucked by the planet’s gravity. Computer, please tell me you can fix that.”

Silence. Was it disabled by an EMP? A solar flare? Her ship was shielded against electromagnetic pulses.

“Triblets! Our shields are dead!” Heart in her throat, Fianna frantically attempted to restart the manual controls. Emergency batteries, no go. “Computer, if you don’t wake up, we are going to explode on that rainbow shell!”

Fianna saw her life flash before her eyes… not really, but she always wanted to know how that would feel. For now, she wanted to catch the lowly bastard she’d come to collect. If this was part of the planetary defenses, how had his shiny yacht reached the surface? She cringed as she braced for impact with the planetary shield. Guardian Angels of the universe, please protect us.

The ship kept falling… and accelerating toward the lush blue-green planet below. “We dropped through the shield with no damage!”

She struggled to think. “We are headed straight for the surface in free fall.”

“Not good?” The feline shuddered and her fur turned black. “Sheba not like falling.”

A collision shock, a loud bang, then the roar of air against the hull indicated they’d entered the atmosphere. They only had a few minutes.

Fianna wiped sweaty palms on her synthetic leather pants. Did the temperature on deck increase? Without shields, they’d burn into the atmosphere, or crash and explode on the surface. Unless…

The emergency landing thrusters could function without sophisticated electronics, but they would need a spark to ignite.

Sheba! “No, baby girl, thanks for reminding me.”

Fianna’s implanted vision software and telepathic link still worked. Her body must have shielded its power source from whatever disrupted the ship’s electronics. She could use it to spark the thrusters… if she survived the hard linkup.

She slid off her seat, stumbled down through a floor hatch, and down ladders, to the underbelly thrusters. She’d never used them before. The sudden, intense heat made sweat drip from her brow. Would the ship explode? She scratched the small port at the base of her neck and pulled out a thin wire, then she touched the end of the wire to a port in the dark console.

May the Guardian Angels of the universe protect cat and human.

The wire sparked. Fianna shook and jumped off with the shock. The console lit up and the emergency landing thrusters roared to life. The sudden deceleration pinned Fianna to the floor, then she bounced off the engine room bulkheads. The entire ship rocked like a flimsy, disjointed toy. Saved? Or was it too late?

Fianna didn’t want to die. Too much depended on her mission’s success. Her mind went blank.