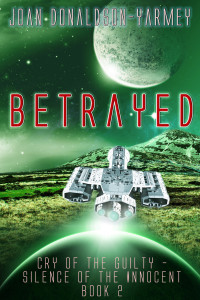 Despite a promising start, a penal colony set on a far off planet quickly disintegrates into chaos. When the weather turns stormy and snow falls, hungry and cold prisoners swarm the warehouses looking for food. The spaceship that had remained on the planet to be used for trips for supplies is attacked by the prisoners and lifts off the ground. Unable to land due to fear of being attacked again, the ship finally abandons the prisoners and the half build village and heads to their home planet.

Gwin, a prisoner, and the historian Sari, who is left on the planet by mistake, had discovered a cave of native inhabitants on one of their explorations. When the snow and cold and fighting forces them to leave the village they meet up with Jawn and his brother Georg, both prisoners. The four band together and go to the cave of the natural inhabitants hoping for help. They are ignored and are close to death from cold and starvation before finally being invited into the cave. Their resulting friendship leads to heartbreak for the cave people and could adversely affect the future generations of the planet.

Once the stage had been built in front of one of the space ships, Governor Lind, the first governor of the planet they had landed on almost three weeks ago, began her speech.

Gwin and the rest of the almost twenty-five hundred prisoners half-heartedly listened. It was just a pep talk that was supposed to make them all feel as if being banished to a far off planet because the prisons on their own were too full was something to be proud of.

“You have all been given a chance to start your lives over again. You are the founding members of a new society, a society that will be the forerunner of many generations to come. You will be making the decisions on which the future of this planet will be based. It is up to you to make this a self‑supporting colony that will eventually become part of the space arena.”

The huge meadow was full of the prisoners, as well as the hundreds of police officers and various other people brought along to help erect the buildings of the village, get the soil worked up and the seeds sown, and to keep the peace in the new society.

Gwin tuned out Governor Lind. She wasn’t interested in being part of this new society with all these prisoners. She had been framed for murder on their home planet and been sent to the penal colony about to be founded on this untouched planet. Her main mission now was to figure out how to get onto one of the space ships when it returned home so she could clear her name and get on with her plans to marry Mikk.

It didn’t seem possible that Royd would be here. The last she’d seen of him was at the Assembly of the Global Alliance. There he had spoken about the five planets the two of them had explored in the quest to find a suitable one on which to start a penal colony. The planet he’d recommended was the one that she had hoped he wouldn’t. It was pristine and beautiful and she hadn’t wanted it spoiled by the prisoners. She actually stood up and countered his recommendation and had been invited back the next day to explain her objections. It was that night that she had been framed for murder and sent to the space prison Ceriem. And the prisoners from the Ceriem, along with hundreds from other space prisons, had been chosen to begin the penal colony.

Was it really possible that Royd had been on the flight and was here on the planet? Gwin was surprised. Never once had he mentioned he wanted to fly the prisoners back to the planet. She wondered how he had gotten the assignment.

She also couldn’t believe her luck. He probably had heard about her being charged with murder and he would know that the charges weren’t true. He would help her get back home to prove her innocence.

Gwin felt her spirits raise. For the first time since that morning weeks ago when she’d woken up disoriented and covered with blood, she felt some real hope. She envisioned how she would quickly explain what had happened and how he would immediately offer to help her. She knew he’d never believe she was a murderer and he would vouch for her to Governor Lind. With both of them on her side, she’d be heading home on the return flight.

An idea entered her mind. Could that be why he had taken the job as Flight Director? Had he come to help her? The idea seemed a little far-fetched. They were friends in the way that fellow workers were friends but nothing more. They didn’t live in the same Megalopolis and rarely saw each other when they weren’t working together. It made more sense that he’d taken the job because it had been offered.

She began pushing her way forward through the solid crowd. She had to get his attention. They had to start making plans. It was tough work. The prisoners were packed tight and no one could step aside for her.

The guns of the space ship Treachen fired into the air as a police officer raised the flag and claimed this planet on behalf of the Global Alliance which controlled their planet. Gwin had just decided to head to the side where there seemed to be more room to move when the governor’s speech ended. The crowd began to disperse, most going in the opposite direction she was.

She saw the governor descending the stairs of the stage, the space captains behind her. She recognized Royd. He was one of the last ones.

She was too far away. He couldn’t hear her.

“Shut up.” One of the prisoners shoved Gwin sending her off balance.

“Get out of my way,” Gwen yelled at them.

They stopped and stared at her, blocking her way. “What are you in such a hurry for?” one of them asked.

Gwin ignored the question as she dodged around them. “Royd! Royd!”

He was on the stairs.

She pressed harder against the other prisoners. She yelled his name once more and he glanced in her direction.

They made eye contact and she knew he recognized her. He looked shocked to see her and kept walking.

“Royd.” She said suddenly anxious. “Royd, stop! I’ve been wrongly accused of murder and I need you to help me.”

Royd’s pace picked up. He didn’t looked at her again.

“What do you think you are doing?” A police officer growled at her.

“I need to talk with Flight Director Royd,” Gwin gasped, trying to keep him in her sights as she struggled against the officer.

“You were read the rules before leaving the space ships,” the officer said. “No prisoner is allowed to have contact with any of the crew members, the scientists, or the commanders unless they initiate it. I don’t think Flight Director Royd wants to talk with you.”

He was almost out of her sight. Panic gripped her. He was her only hope and he just kept walking. “Royd, you have to help me!”

Then he was gone.

“Royyyd! Come back!” She slowly sank to the ground. Why hadn’t he stopped and come over? He’d seen her. She knew he had because she’d looked right into his eyes. Why hadn’t he stopped to talk to her? All her fears and frustrations and anger and panic overwhelmed her and she began to cry. The tears streamed down her face. What was she going to do now?

Royd hurried back to the Nostra. He reached his apartment and entered, shutting the door. He went over to his supply of liquor and poured himself a drink. He was angry at the governor. This was her fault. He hadn’t wanted to attend the flag raising ceremony; he hadn’t wanted to take the chance of Gwin seeing him. He preferred to stay on the space ship now that his job was done.

But Governor Lind had insisted and no amount of arguing had dissuaded her. She’d sent a police officer to escort him to the stage. He’d hurried out of the ship and over to the stage where he’d rushed up the steps and stood behind the space ship captains hoping Gwin wouldn’t see him. But then the governor had mentioned him by name. He’d been shocked at being singled out and knew that his plan to remain out of sight until the Nostra left the planet was ruined.

There was no way he could slip away so Gwin couldn’t accost him. He’d either have to go down the steps now in front of everyone or jump off the back of the platform perhaps breaking a leg. As those were his only choices he’d stuck it out and managed to evade her at the end.

What was he going to do about her though? She now knew he was on the planet and she would expect him to help her prove her innocence. But what she didn’t know, yet, was for him to do that he would have to admit his guilt to the Space Organization at home. He’d have to tell them about his agreement with Zudo from the planet Pidleon. He would have to testify that he and Zudo had scammed the organization out of a lot of money in purchasing the space ships for the flight and in signing contracts with suppliers on both Pidleon and Lodigan, the two planets between their home planet and the penal colony. And there was no way he was going to do that for her.

Then a thought occurred to him. Knowing Gwin, she was not going to just accept her predicament. She was going to fight back. More than likely she’d already formed a plan for getting home on the return ships. He had to make sure that didn’t happen.

Royd refilled his glass. He’d only glanced at her quickly but his mind had absorbed everything: the weight loss, the dark circles under her eyes, the look of desperation. He wasn’t going to let that sway him, though. From now on he had to treat her as the one person who could wreck his future. She was the enemy.