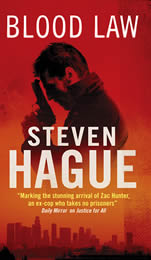 When Zac Hunter receives a cry for help from former snitch, Angel Cortez, he rushes to her aid.  Angel’s daughter Gracie is missing, and Lunatic, Angel’s gang leader boyfriend, knows more than he’s letting on.  Discovering that a rival crew nabbed Gracie from an East LA park, Hunter agrees to do what he can to find the missing girl.

Cassius is a major league low life, a drug dealer with the Imperial Knights whose shitty existence just gets shittier by the day.  His gang boss doesn’t trust him anymore, he’s being blackmailed by two guys that have his nuts in a vice, and worst of all he just can’t stop thinking about his next hit of crack cocaine.  Cass is battling like crazy to keep his head above water, but the smart money says that any day now he’s going to drown.

Stone is a man on a mission: he’s made some mistakes in his past, mistakes that have cost lives, and he’s determined to atone for them.  Armed with his hunting knife and aided by his two fur-covered hellhounds, Caleb and Joshua, the Apache is out for blood.  Either vengeance will be his, or he’ll die in the attempt.

These battles for survival play out in the run down back streets of LA, where drugs are currency and guns are negotiating tools.  As two rival gangs wage war, only Hunter and the mysterious vigilante Stone will be able to save Gracie – and prevent a city from going up in flames.