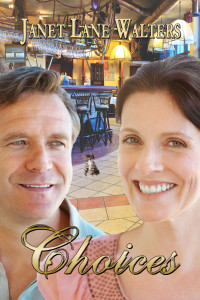 In Janet Lane Walters’ Choices, published by Books We Love, Johanna Gordon devotes her time and energy to her job as Director of Nursing at Hudson Community Hospital. With budget cuts hanging over her head, Johanna suspects the CEO of scheming a plan that threatens her job as well as the hospital, and she’s determined to find out why.
The choices she’s made for herself and her career leave her with no social life until she meets Dylan Connelly. He’s everything she’s always wanted, loving, devoted to his kids and everything she’s never had. Just when she finds love with the new man, an old flame returns with promises of a life together. Johanna has to decide between security and companionship, while trying to recapture the past, or moving forward with her new life.