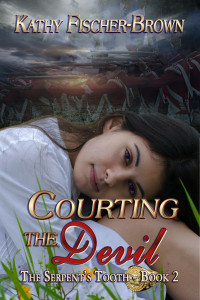 Four years after a near fatal blunder uproots her from her home and inheritance, Anne Darvey, daughter of the Marquess of Esterleigh, finds herself an indentured servant on a farm near Fort Edward in New York, as the British army advances toward Albany. Driven by guilt over the pain she has caused her father and grief over her lover’s death, she sets out to deliver a message. The consequences lead to the discovery that all is not as it seems, and sets in motion events that lead to love and danger.

5 Stars “I liked this book even better than the first, perhaps because there were more kind, decent–even funny–characters than were in the aristocratic snake pit depicted in the first novel. The author’s knowledge of this theater of the American Revolution is accurate; she knows the period well. Her characters are three-dimensional, proper 18th Century people in a well-researched setting….” Juliet Waldron, author of Mozart’s Wife

… a high caliber historical drama. I commend Ms. Fischer-Brown on her research and attention to detail. It moves well with interesting characters and story lines….Two thumbs up for Courting the Devil.” —Writer Wonderland

4 ½ Stars “…kept me in suspense and filled with anticipation of what was to come. This book was written with gentle reminders and hints of the past without rehashing the original story and the scenes were descriptive and engaging….I like the Anne of this book a lot more than the previous book. It is clear she has grown up a bit and sees things differently.” — Romantic Historical Lovers

His memory had not failed him. Summer nights were infinitely cooler by the pond near the creek. Brighter as well, with milky flashes of light reflecting off its smooth surface and a riot of fireflies darting among the reeds, twinkling over the water like so many stars. Had there been a moon, it would have floated on the water, sending glimmers of light up to the treetops.

He would have seen her then by moonlight.

Rather it was the dull light of the ill-smelling flame of his lamp that revealed her there at the edge of the pond in the tall grass, sitting in nothing but her damp shift, her back against the trunk of a sycamore, as she applied a towel to her hair. Had he’d arrived moments earlier, he might have seen her emerge, dripping from the creek like some water nymph. He paused where he stood and watched for a moment, then he cleared his throat and continued closer.

The brush crackled under his feet. He slowed his steps when she turned, a startled look on her face, her fingers frozen in the wild tangle of thick, dark hair tumbling over her shoulders and down the length of her back. At the sight of him, she quickly covered her chest with crossed arms.

Harris hesitated, holding up the lamp so that its light revealed his face, causing her to blink into the brightness. “No reason for alarm,” he reassured, and hung the lamp on a bough just above her head. “I didn’t mean to frighten you.”

She turned away and on her knees quickly gathered up the objects spread out on a towel in the grass. He leaned on his hand against the tree, and regarded her with interest. In the light of the swinging lamp, drops of water shimmered on her bare arms. The smell of milled soap with a hint of lavender emanated from her hair, mingling with her own sweet, warm scent on the heavy air. Though coarsely made, her damp chemise clung to her like second skin, revealing the soft, round contours of a supple body. He imagined his hands holding her close, the feel of her, lithe and wet, against him, and fought back the stirring in his groin.

He licked his lips. “I didn’t expect to find anyone here at this hour of the night. Forgive the intrusion, I—”

She glanced up at him, a look of uncertainty in her eyes, along with the flashing sky. “No need for apologies, sir. I was just about to leave.” She rolled her hairbrush and a small, well-used sliver of soap in its original paper wrapper into the frayed huckaback towel. After slipping into her shoes, she snatched the coarse-woven skirt and linen bodice from the low bough from which she had hung them. Having wrapped everything in the skirt, she rose with the grace of a goddess and turned toward the path back to the house, the bundle clasped to her breast.

He stepped away from the tree and blocked her escape. She halted just short of him, but did not avert her eyes from the ground before her. “I wish you wouldn’t go,” Harris said through the dryness in his mouth.

Maintaining her focus on the dark path beyond the circle of light cast by his Betty lamp, she drew in a slow breath. In spite of the heat, she shivered. “There is nothing to keep me, sir.”

He laughed softly. “I hope that was not meant to be a gibe at my vanity?”

She shook back the mane of dark, wet hair that had fallen over her face, but kept her eyes averted. “It was not my intention to appear so bold.”

“Then I’m very much relieved!” His gaze wandered over her wet, scantily clad form, at the soft rise of her breasts before they disappeared under the cover of her infringing bundle. “But I forget myself. It is your modesty and virtue that—”

“You needn’t explain yourself. Not to me, sir. Now, if you will kindly let me pass….”

At that she raised her eyes fully upon his face with a slow and deliberate stare, as if the impulse to look at him had been spontaneous and she resisted its appeal with all the self-control at her disposal. “My feelings are of no consequence, Mr. Harris,” she said in a soft voice, devoid of expression.

“But you do have them. Are you dismissing them as insignificant, or is it that you have no desire to discuss things of a personal nature?” Her soft, full lips were enticing. Even in the sweltering night air, the heat emanating from her body wrapped around him like a caress.

“If you really must know, sir, I have no time for such diversions.”

“Nor anything else, I dare say.” Fighting the urge to clasp her to him and taste her mouth, he stepped aside to let her pass. “You push yourself far too hard. It’s a sure sign.”

Just beyond the spill of light from the hanging lamp, Annie stopped and raised her head. For a long while she stood in silence, as if waiting for him to speak.

He sensed he had struck a nerve. “A sure sign of what? you might ask. Then again, I would be presuming to know your mind, which, I assure you I do not… All right then, I’ll tell you. I notice things about people who labor for a living, Miss Annie.” He stepped toward her, outside the circle of dingy light. “Those who work for their own subsistence tend to perform their duties with an honorable sense of purpose. For when successfully accomplished, the task at hand yields its own reward. From my own observations, I’ve also noted that those who are obligated to toil in the service of others tend to do only that which is expected of them. No more, no less.” He paused. Again the sky flickered, revealing her standing with her back to him, head lowered. “Where rewards are few, there is nothing to be gained by working one’s self to an early grave. That would leave one unable to savor the freedom earned by such senseless toil.”

She turned slowly and swept his face with her gaze. “Do you not work for your living, Mr. Harris?” In her soft voice, he detected a note of challenge.

“I am a schoolmaster, Miss Annie.” And then he vacillated, his mouth twitching into a smile. “I was a schoolmaster…until I lost all my students! For the life of me I can’t fathom why…” She did not appear moved by his attempted levity. “But, no, I never had a reason to earn a living. My father was…well-connected.”

Her eyes shimmered in the darkness. “It is said, Mr. Harris, that the Devil finds work for idle hands.”

He laughed softly. “It is also said, Miss Annie, that to speak of the Devil is to court his presence.”

She lowered her face until shadows once more enveloped her features, her hands tightening around the bundle. “If that is so, then I hope he finds me busy. Good night, Mr. Harris.” She vanished quietly into the darkness