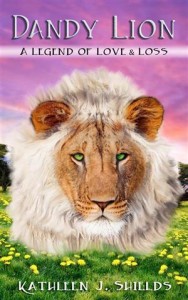 Dandy Lion – A Legend of Love & Loss is a Christian-based story that follows a young lion named Dandy throughout the course of his life.

Wanting nothing more than to be accepted and loved by his pride, Dandy instead is the recipient of laughter and ridicule when his long sought after mane grows in and is anything but normal. White thick fur, frayed at the ends his head looks more like a white fluffy dandelion flower than a lions mane.

However, this does not deter Dandy from helping those in need or touching the lives of others, solving problems and helping the sick. Yet, throughout his life, his best friend Doti begins to notice how after each life he touches a wisp of his frayed hair is whisked away by the wind.

Each chapter ending with scripture, this story will fill your soul with hope and ambition and help others accept the end of life.

It was a cool spring morning when he was born. Soft and small, eyes still closed but his mouth open and calling for his mother. He cried in the dark for a friendly nose to cuddle him and when she licked his head, her soft warm tongue enveloped his senses and made him smile.

He was a lion cub, the only one born this year to the pride so it made him ever more special to his mother. As she took his small body and curled her massive paws around him for protection she smiled, knowing as she looked into his fuzzy beige face that he truly is a very special lion.

It was at that moment that a strong wind blew into the cave and with it, a single dandelion seed floated in the air and landed on the new baby cubs nose. As he brushed it away with his awkwardly large paws, he asked his mother about it.

“Mama, what was that tickly thing?”

“That was a dandelion floret.”

“Who’s Dandy?” He asked with the innocence of a new born cub. His mother smiled, realizing his confusion.

“A dandelion is a flower; a beautiful fluffy white ball-shaped flower. Each white floret that creates the shape of the ball is a seed. And when it is ready, a strong wind blows against this flower and scatters those seeds across the world. Those seeds spread out far and wide and then land miles and miles away from where they began. Then, they grow.

The flowers that come from their seeds are completely different from that fuzzy white seed. They are a brilliant yellow with layers of thin petals that are as bright and beautiful as the sun.”

“Who’s son?” The cub asked confusing yet another word. The mother smiled as a second white dandelion seed floated in and landed on her son’s head.

As he swiped it away with his paw, Jomo, the male lion walked into the cave and looked at the newborn cub. “What is his name?”

The mother looked at her sweet young cub playing with the dandelion floret and spoke proudly.

“I will call him Dandy. My little Dandy Lion.”