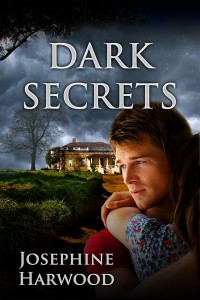 Rick’s passion was his music until he met Angela. Angela never knew passion until she met Rick. Soon they would both know the passion…of a stalker’s revenge.

To escape painful memories, Angela Donavon moves from Connecticut to West Texas. The last thing she wants is a romantic relationship. Local garage band singer Rick Anderson is hotter than the triple digits of The Lone Star State. With his seductive voice and hypnotizing blue eyes, he melts the ice around her heart uncovering the passionate woman underneath. But when she becomes the unsuspecting target of a stalker, will she trust Rick with her dark secrets? Someone is watching Angela…could this disturbing obsession prove to be deadly?

Copyright 2012 Josephine Harwood
This ebook is licensed for your personal enjoyment only. This ebook may not be re-sold or given away to other people. If you would like to share this book with another person, please purchase an additional copy for each recipient. If you’re reading this book and did not purchase it, or it was not purchased for your use only, then please return to Smashwords.com and purchase your own copy. Thank you for respecting the hard work of this author.

All rights reserved. No part of this book may be reproduced or transmitted in any form or by any electronic or mechanical means, including photocopying, recording or by any information storage and retrieval system, or by any means existing now or in the future, in whole or in part, without the express written permission of the author.

This is a work of fiction. Names, characters, places, organizations, and incidents are either the product of the author’s imagination or are used fictitiously, and any resemblance to actual persons, living or dead, is entirely coincidental.

This story contains some adult sensual content and is strongly recommended for mature readers eighteen years of age or older.
Dedications

To my high school sweetheart, my best friend, my inspiration, my husband, John, I love you.

To our boys: Shane, for his contagious laugh and sense of humor, and Steven, for his unexpected hugs and incredible sensitivity to others.

To my sister, Diana, whether it’s my songs, plays, or stories, you have never failed to give your honest opinion or your loving support.

To Sandy Smith-Priest, our friendship is priceless and timeless, and only you know my rock and roll heart.

To Paul Hearne and Judy Rogers, you’ll never know how much your words meant to me.

To my LOHS English teachers, Diana Lee Mills and Judith Skiba, I thank you both for consistently encouraging my passion to write stories.

To the rest of my family, friends, and ego boosting/busting beta readers, your feedback of my work was tremendously helpful.

To Donna Casey of Digital Donna, thank you for designing such a wonderful eBook cover.

I sincerely thank you all for helping me turn a lifetime dream into reality.
In loving memory of Robert and Miyoko Jones,
You are finally together, again.
I miss you, Mom and Dad, more than words could ever say.
PROLOGUE