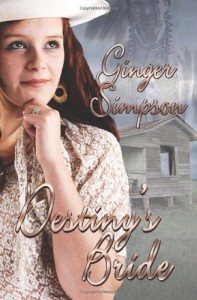 It’s 1860 and Cecile Palmer looks forward with eagerness toward the yearly Spring Fling. The gathering of folks from all over the region provides the most excitement imaginable…until she experiences love at first sight…and with a stranger. After meeting handsome Walt Williams, Cecile’s greatest obstacle is convincing her father, the local banker, that his only pampered child is ready to marry and a stranger is the right man for her.

The ranch her fiance describes doesn’t turn out exactly as she imagined, and when Walt fails to return from getting winter supplies, another difficult decision presents itself. Can Cecile live among Indians despite being a white woman? And will the brave she nurses back to health turn out to be her real hero?