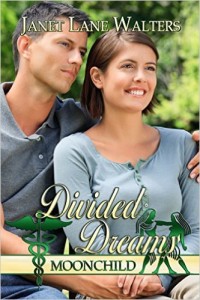 Rob Grantlan has given up medicine to become an author. As a Gemini, having two careers seems just right. His quiet days are overturned by the death of his wayward sister and his taking guardianship of his two month old niece. When he learns the father of the infant is his old flame Andi Sherman’s brother a plan unfolds. Years ago, he hurt her. He still loves her and he wants to regenerate that love.

Andi Sherman is now a nurse practitioner in Pediatrics. She has vowed never to return to Fern Lake. The offer of a partnership in a friend’s practice is tempting. She refuses until she learns Rob has given up the practice of medicine. She believes he will leave town. On the day after her July birthday, she returns and comes upon the accident, finds the dying woman and the baby. When she learns the little girl is her niece and Rob hasn’t left town she is conflicted. She still loves him but she can’t trust him. News from her brother brings a threat.