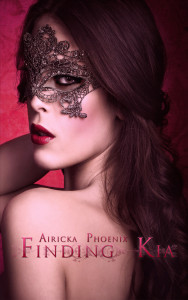 Kia Valentines had always accepted the fact that she was a nerd, a nobody. It was a badge she wore with honor, until the day she saved Claudia DeLorenzo’s life and lost herself.

When offered the chance to shed her identity for a single night, Kia never believed it would change her life. It was one night. It meant nothing, or it shouldn’t have. But that single night turned out to be her undoing when she finds passion in the arms of the one person she can never have.

Adam Chaves was more than just a gorgeous face, he made her laugh, but more importantly, when he looked at her, she felt like the most beautiful girl on earth. But Adam has no idea that Kia was the girl behind the mask and Kia has no intention of telling him. But a secret can only be kept if no one else knows about it. Claudia knows and she wants something Kia isn’t willing to give in order to keep it.

Will Kia succumb? And just how far is Claudia willing to go to get what she wants?

Kia Valentines had always accepted the fact that she was a nerd, a nobody. It was a badge she wore with honor, until the day she saved Claudia DeLorenzo’s life and lost herself.

When offered the chance to shed her identity for a single night, Kia never believed it would change her life. It was one night. It meant nothing, or it shouldn’t have. But that single night turned out to be her undoing when she finds passion in the arms of the one person she can never have.

Adam Chaves was more than just a gorgeous face, he made her laugh, but more importantly, when he looked at her, she felt like the most beautiful girl on earth. But Adam has no idea that Kia was the girl behind the mask and Kia has no intention of telling him. But a secret can only be kept if no one else knows about it. Claudia knows and she wants something Kia isn’t willing to give in order to keep it.

Will Kia succumb? And just how far is Claudia willing to go to get what she wants? “You did what?” Nessie hissed in Bio, after I finished telling her about my adventure.
“I know! Trust me. I’m never saving anyone ever again,” I muttered, face-planting into my open binder. It hurt far more than it should have when my glasses dug into my face.
“Then she just invited you to her party?” There was a twinkle in her eyes that I was beginning to find very irritating.
“Yes, but she’s like blackmailing me into going, using my stupid heroism as leverage.” Short, purple nails gouged into my arm. “Ow!”
She ignored me. “Do you know what this means?”
“Yeah, that you’re trying to amputate my arm!”
She scoffed and let me go. “Not that!” She wiggled closer, as close as she could get while remaining in her stool. “Not just anyone gets invited to Claudia DeLorenzo’s parties, Kia! People would kill to be in your shoes right now!”
I peeked down at my scuffed and filthy high tops. “If they want them that badly, they can have them. I got them for ten bucks at—”
“Kia!”
“Ms. Chaves, is there a problem?” Mrs. Pang’s voice carried like a whip across the room.
“No ma’am,” Nessie muttered, turning back to her open textbook. She waited until Mrs. Pang’s back was turned once more before pouncing on me. “You have to go!”
“No I don’t! What’s she going to do? Ignore me for the rest of the year?”
“You don’t understand!” Nessie moaned, practically hanging off my arm. “I’ve heard things! Secret things about the goings-on of her party—”
“Goings-on? Is this a party or a cult meeting?” Then another thought occurred to me. “You’ve been here a month, how do you know about any of this?”
“I hear things. Kia!” She throttled my arm. “Please go. For me? I’m begging you!”
Not understanding her at all, I dug into my back pocket and tossed her the card. “Here. You go.”
She fell on it like a starved bear on a squirrel. Any minute I expected her to moan and stroke it saying, precious! My precious! She didn’t, but she did sniff it, which was equally creepy.
“Oooo!” She moaned, her eyelashes fluttered as her eyeballs rolled back into her skull. She rubbed the card to her cheek. “It smells so pretty!”
I edged away from her, severely disturbed by that side of my friend. “Well, I wish you and the card a happy life together.”
With a final sigh of elation, she let her hands drop into her lap. “I can’t go. Claudia invited you. She won’t let me in.”
“Seriously? How would she know?”
The look on Nessie’s face said very clearly I was stupid. “She knows everything! Even I know that.”
I shrugged. “Well, whatever. I’m not going.”
“You have to!”
“Why?”
Nessie sniffled. “Because! Please! Please! Please! Please!”
“Ms. Chaves!”
But Nessie’s whole focus was now on me, her big, blue eyes bigger and bluer than usual. “Please!”
“Ms. Chaves!”
I nudged her, but she was determined now, going so far as to clasp her hands together under her chin and pucker her lips. “I wuv you, Kiki!”
Ugh.
“Okay! Fine. Stop!”
With a hoot that made several people around us laugh, Nessie turned front to face the wrath of Mrs. Pang. “I’m here!”
Arms folded, Mrs. Pang glowered at her. “Excellent. You can be here after school in detention.”
“Totally worth it,” Nessie hissed from the corner of her mouth once Mrs. Pang’s back turned.
I personally couldn’t justify anything being worth detention, but then I wasn’t Vanessa Chaves, collector of detention slips. I think she secretly had a detention fetish.

After school, I bypassed the bus and hoofed the three blocks to work. Angel Fuller, Mr. Fuller’s nephew, stood at the counter, filling ketchup bottles. Eyes the soft hazel green of a forest splintered by sunlight lifted and met mine.
He grinned. “Hey, K!”
I waved. “Hey, A!”
It was such a stupid joke between us, the whole rhyming first initial thing, and I couldn’t tell you when it started, but it stuck so we went with it.
“How was school?” Angel asked, as he screwed the cap on a bottle.
I made my way around the counter towards the set of swinging doors in the back. “I got invited to a super hot party.”
Angel perked. “No kidding! Good for you.”
I snorted. “It’s only great if I wanted to go.”
He shrugged his narrow shoulders. “Then don’t go.”
“Can’t. My life apparently depends on it.”
I pushed my way through the doors into the sweltering heat that was the kitchen. Jerod Ford, our cook, looked up when I trudged through. He wiped his hands on his apron, adding a smear of grease to the already stained fabric.
“’sup white girl?” Jerod liked to think he was black. He wasn’t. He was as white as freshly fallen snow. But we all had dreams.
“Hey, Jerod,” I called on my way to the staff area.
I dressed quickly into my uniform, stored my bag into my cubby and joined Angel up front.
“Boss wants the shelves scrubbed down,” Angel told me. “Can you do under the register? I’ll get the ones in the back.”
I agreed, and took the rag he offered.
It was reasonably empty considering school just let out, but the evening rush would start soon so we always tried to clean as much as possible before closing. It cut back on us having to stay late. Kneeling, I began pulling everything out from the shelves beneath the register.
“Hello? Excuse me?”
“One sec!” I called and pushed everything to one side, out of the way. I got to my feet and positioned myself in front of the register. “Yes? How can I—”
The words vaporized and became wisps of air escaping my throat. My jaw gaped. I knew it did. I could feel it. My eyes were round, wide with panic. They darted, a quick flicker, for an escape route and realized there was no graceful way of doing that. So I stood there rigid and panicked and totally freaked out on the inside as I stared into eyes the color of Bahamian waters. Coils of glossy, black hair tumbled over a prominent brow. There were hints of blue that kept flittering in and out of the strands, urging me to stare, to touch. My fingers trembled with the reckless desire to comb through all that beautiful mess. Mortified, I tried to focus on something else. I lowered my gaze and found myself tracing his sharp cheekbones, his rugged jaw and square chin. His lips were bowed, a sinful tilt that made me forget to breathe.
I was so screwed.
Okay, three things. One, boys like him never smile at girls like me. Two, boys like him did not reside in Mayferd unless they were kidnapped from Hollywood by one of the potato farmers, and three, of all the taco joints in the world, why did he have to walk into mine while I was wearing a dorky uniform? Life, you are such a bitch. Not that it mattered—observe point one.
Across from me, unfazed, oblivious to the torment he was causing me, the boy I had never met before smiled at me with all the beauty and grace of an angel. Was it too late to duck back under the register?
“Hey!”
Crap. How did you do that thing where you opened your mouth and words came out?
“Uh…” Nope. That wasn’t exactly what I meant, but it was a sound so I went with it. “Heeeeyyy, wus up?”
I cringed. God I am such a loser. I dropped my gaze, letting the brim of my hat conceal the flush I could feel boiling beneath the paper thin skin on my face, turning it a very disturbing, and probably frightening, shade of red. I fidgeted with the bill, tucked stray strands of hair back around my ears, touching my tiny ponytail. Anything to keep from looking at him.
I stared down at the neatly labeled keys in front of me. “What do you want?” I winced, squeezing my eyes closed tight. Wow. Way to be a loser, Valentines. “I mean, what can I get you?”
He chuckled, the sound ridiculously sinful. “I’ll take the family package.”
I punched it in quickly, never once looking up at him, hoping that if I worked quickly enough, he’d go away sooner. I gave him his total and turned towards the drink cooler on my left. So determined to be rid of him, I forgot about the mess around my feet. I kicked a steel container of ketchup packets. The thing scattered, knocking over the dispenser of napkins which in turn fell into the carton of straws, upending everything and making a world of noise. Cursing, I swooped down to salvage what I could, all the while relieved to have an excuse to be away from those paralyzing eyes.
“What happened?” Angel ran out from the back, his eyes anxiously taking in the scene. Well, at least he hadn’t brought the baseball bat. That would have been really awkward.
“It’s fine!” I muttered, scooping ketchup packets back into their bowl. “I had an accident. Can you…?” I gestured vaguely to the register, indicating he take over while I cowered like a total, well, coward, beneath the counter.
This was quickly becoming a day I wanted to erase from history.