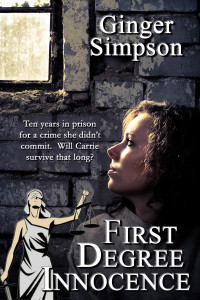 Carrie Lang’s sheltered life ends with a prison sentence for involvement in a bank robbery. Her arrest comes on the day she’s called in sick and stayed inside, so she can’t explain how an eye-witness describes her in great detail, down to the make and model of her car.

A terrible mistake has been made, and her insistence of innocence falls on deaf ears. Even her fellow inmates don’t believe her as it’s a claim they all make. Alone in the world, she has no one to turn to for help, and not a single soul to campaign for her freedom…at least until she makes a valuable friend.

In the meantime, a plan for retribution is brewing, and naïve Carrie finds herself smack dab in the middle of an evil scheme concocted by the prison bully. A ten year sentence seems mild when she’s threatened with death for refusing to participate. Can Carrie find a way out of this horrible nightmare, or is she destined to spend her days locked in terror, isolation, and the cold gray interior of prison walls?