Sign UpLogin
You are here: Home / Books / Forever There For You

Forever There For You 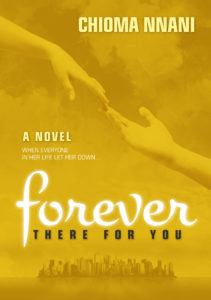 When NADINE is confronted with the reality of her failing marriage, her first instinct is to work it out. She has had it drummed into her that marriage is ‘for better, for worse’. Walking out is just not an option – her faith would condemn her and her culture would make her a pariah.

The combination of Nadine’s background, education, social standing, friendships, faith, experiences and past relationships is meant to equip her to become a success. Failure is alien to her and love means forgiving at all cost.

As she tries to survive and make the most of the curves that life has thrown her, she discovers that ’success’ is a subjective term, and ‘happily ever after’ is something that you have to discover and define for yourself …

Christmas this year was just … not looking good. Having returned some hours ago, from the one-year memorial service held for last year’s victims of the Sosoliso plane crash, Nadine had just locked herself away in her room ever since. If Christmas of 2005 wasn’t the worst that the residents of Port-Harcourt had ever seen, it came close. On the 10th of December 2005, a plane from the fleet of Sosoliso Airlines returning from Abuja, burst into flames on the runway of the Port-Harcourt International Airport. A plane crash was never a good thing, but there were some aspects that made this event, more appalling. Of the 110 passengers on board, about 61 were schoolchildren returning home for the Christmas holidays, from their private boarding school in Abuja. And when the plane burst into flames, it did so right before the eyes of the parents, who had come to the airport to pick up their children. The fire was not put out, even if the Fire Brigade was called – they said they didn’t have water. The Port-Harcourt Airport boasted one fire truck and no ambulances. So, the plane burned with almost everyone in it … in front of horrified bystanders, who were prevented from helping. But then, how effective would their help have been? Some of the villagers in the area defied the authorities and tried to put out the fire. But as their weapons were limited to buckets of water, no respite was forthcoming. No respite for the passengers on the burning aircraft, including the children. No respite for the parents, who would probably never recover – to lose a child was one thing, but to have it happen in your presence? And no respite, it would seem, for the country. Stark incompetence of uneducated, greedy leaders who clearly hated the country enough to mismanage her resources had put Nigerians in this situation. What other explanation was there, for the Fire Brigade running out of water? And in Port-Harcourt, the capital of Rivers State – the place where water was practically a natural resource? The irony of it was not lost on any of the witnesses. The sheer incredulity of it was voiced in the confused question of a child who had not been on the ill-fated flight, “So, my classmate died because there was no water? How does the Fire Brigade run out of water?”

And there was a shared belief that if the country’s educational system was not so messed up, those children may have been studying closer to home – meaning they would never have been on that plane. A number of people felt that the country’s leaders should have been on it, instead – when the news first broke, it seemed they were. There was a convention of some of the national leaders in Abuja at the same time, and it had been assumed – wrongly, though – that they would return on that particular aircraft. Ah, if only, some mused openly. Instead, the blood of innocent people, including children aged between 10 and 18, was substituted. The international media clearly thought it deserved no more than a passing mention, so Nadine was not aware of the full scale of the tragedy, till she returned from France for the Christmas holidays.

It felt like everyone knew someone who had been on that plane. Her father’s business partner lost one child. A member of her mother’s staff lost his wife. Another woman lost all three of her children. How could anyone even begin to imagine the mind-altering grief they were suffering? Nadine couldn’t. And she had just been shocked. Not even witnessing the openly demonstrative grieving at the funeral service, which she attended with her parents, could un-numb her.

A year later, not much progress had been made. An inquiry was supposed to have been held, but nothing was done. Even now, nobody knew what exactly had gone wrong; there was no precise and distinct answer to ‘what caused the crash?’ They said ‘the black box’, which was supposed to be an indestructible tracker of some kind, was missing. Not that it had been destroyed in the inferno. It was missing, as in, had never been on the plane. There was talk of compensation for the victims’ families, but that was not forthcoming. How one could presume to be able to reimburse another for the loss of life, was something that Nadine preferred not to contemplate. But at the memorial service earlier today, when families gathered with their friends who had come to commiserate with them, wept afresh for the loss of the future of the nation, something snapped in Nadine. The air of victimhood was hard on the nostrils and a point, Nadine thought she would choke. Two people eventually survived – one was a student, and the other was the personal assistant of a pastor, who had also died in the crash. But Nadine could not help but think how that the victims weren’t only those who had been on the plane; they also consisted of those who were forced by the wilful actions and omissions of their leaders, to be party to this. Watching the mother – now, woman – who had lost all her children, unable to lay a wreath because she was still so wracked by grief … there were no words. She looked sapped of energy and her supply of tears was probably exhausted. And Nadine hadn’t stopped crying since – she hadn’t thought that any one human being was capable of so many tears. For some unfathomable reason, she couldn’t stop the tears. No, this Christmas wasn’t shaping up well, at all.

Maria’s piercing scream, preceded by the sound of breaking glass, propelled Nadine out of her room and down the stairs. Her mother’s raised voice on Christmas Eve was not necessarily a cause for alarm – she didn’t seem to be able to instruct the house staff otherwise. That, or it was impossible for them to carry out instructions given to them by the lady of the house, unless her voice was raised. Many broken plates – ample proof of either. But this was different. Although her voice had an urgent note and something was definitely broken, Nadine definitely heard “Chukwunonso”, not any of the names of the domestic staff. There was also something in the tone of Maria’s voice that sent chills down Nadine’s spine. She had never seen her parents fight and she was unsure what to think.

At the bottom of the stairs, her view of the sitting room was obstructed by two members of the house staff, who had rushed out on hearing Maria’s scream. Without thinking, Nadine continued her race to what looked like the genesis of the disturbance. Her father lay motionless on the floor.

“What happened?” she managed to ask, as she knelt beside him.

But nobody heard her. Her mother was starting to sound like someone in the throes of re-discovering her inner banshee. And the female house-help was packing the pieces of a broken tumbler, nearby.

She was worried about a broken tumbler?

It didn’t occur to Nadine that the maid might have been concerned that stray shards of glass could cause injury.

“What happened?” she asked again, louder this time.

Maria now had tears streaming down her face and was asking her husband not to leave her.

“Forever There For You” is available as a paperback on all Amazon sites. It is also available in Kindle, iBook and EPUB formats in all Amazon markets, Smashwords, Overdrive.com, Apple, Kobo, Okadabooks.com (for the African market) and major online book stores.