Sign UpLogin
You are here: Home / Books / From OMAHA to DA NANG: Reflections of a 2-Yr Marine

From OMAHA to DA NANG: Reflections of a 2-Yr Marine 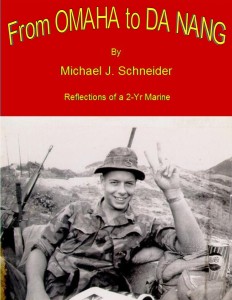 Not everybody can be a hero but everyone can have an adventure. This book takes you through the rigors and humiliation of Marine Corps Boot Camp and onto the life afterward. What could an enlisted Marine serving during the years 1969 – 1970 expect?
Well Vietnam for sure; but this Marine avoided combat even though he served over 14 months in Vietnam. Life in a rear based unit did have its challenges whether it was trying to stay on your feet patrolling the perimeter wire or avoiding embarrassment while dancing with the Australian Girl in a USO show.

This book presents the humorous anecdotes, grim realities and bonds of comradeship experienced by a Marine whose primary job was that of a Company Clerk. It is intended to guide those contemplating enlisting in the Marine Corps to realistic expectations. For other readers, the intent is to entertain. The incidents related are true and truth is, indeed, sometimes stranger than fiction.

Chapter 1 “On Your Knuckles, Bitch.”

This test was significant because if we didn’t achieve a minimum total score which I think was 250, we would be sent to the “Fat Farm.” Actually the term “Fat Farm” is a misnomer because a skinny kid who failed to achieve the minimum score would be sent there also. I don’t have a record of my scores but my performance was as follows:

I escaped the “Fat Farm,” but my ability to do squat-thrusts would plague me throughout Boot Camp – and we did a lot of squat-thrusts. It was the DI’s favorite form of punishment. It seemed like every time someone in the platoon screwed up, the platoon was ordered to do squat thrusts. Typically a session of squat-thrusts would go like this:
“Face half right,” the DI would order. This command would be followed by:
“Squat-thrusts, 15 repetitions, cadence count.”
Cadence count refers to the fact that we shouted out the steps as we performed the exercise. It was a four part exercise as follows:
Count 1 – we squat down with our hands on the ground between our knees
Count 2 – we thrust our feet to the rear
Count 3 – we bring our legs back to the squatting position
Count 4 – we stand up.
I don’t think we ever did just 15 repetitions. Part way through the first 15, the DI would say something like:
“Alright ladies, looks like you want to climb the ladder, 25 repetitions, cadence count.” This could continue until we’d done a hundred or more. One time I believe we went up to 200. By the time we reached the end of those, we were staggering during the last of the repetitions like a bunch of drunks.
Harassment by the DIs was nearly constant throughout Boot Camp and the DIs could think of some ingenious ways to torment us, either as a platoon or individually. Usually the whole platoon suffered when one private made a mistake. I think the DIs did this not only to embarrass the guilty individual, but to encourage the other platoon members to retaliate later, not an uncommon occurrence.
Some of the punishment inflicted on the single private included:
Elbow and toes: The private was told to assume a front leaning rest position similar to what you would do before you start a push-up except that your body would be supported by your elbows and toes. You would have to stay in this position until the DI told you to get up.
On your knuckles: You would assume a front leaning rest position for this one also, only you would support yourself on your knuckles instead of your hands. You would remain in the position until the DI told you to get up.
Marking time on your knuckles: This was a variation of “on your knuckles.” You would have to lift one arm then the other and count cadence as your arms went up and down.
Sometimes the DI would order a private to do one of these, not as punishment, but just for pure harassment. For instance at mail call when we received our mail, if a private got a perfumed letter from a girlfriend, the DI would order:
“On your knuckles, bitch.”
This was a great amusement to all except the guy on his knuckles.
Guzzle hold: This was when a DI would grab a private’s Adam’s apple with one hand and squeeze. I don’t remember what the private did typically prior to being put in the guzzle hold.
The thing that a single private probably feared most was a trip to the Duty Office. The Duty Office was the place where the DI resided when it was his turn to spend the night with the troops. Most calls to the duty office occurred at night when we were in our billets shining or boots or cleaning our rifles. It would start with the DI hollering from within the Duty Office.
“Private Schneider, report to the Duty Office.”
Then the recruits in the billets would repeat the call.
“Private Schneider, report to the Duty Office.”
I would sprint to the Duty Office. I would stop outside and knock on the bulkhead (wall) near the door, which was usually always open when the DI was inside.
“Who’s that rapping on my door?” The DI’s voice would come from within.
“Private Schneider reporting as ordered, Sir.”
“Get in here.”
What would follow would be a verbal chewing out, followed by being slapped or knocked around by the DI. On the occasion that Corporal Bobo called me to the Duty Office, he stood on a chair to slap me around as I was about six inches taller than him.
Now it was against the Uniform Code of Military Justice for a Marine enlisted or officer to strike another except in self-defense, so when a DI hit you it was usually out of the view of witnesses. I suppose we could have struck back; none of us dared to because it would have brought on even greater retaliation. The pain we incurred was usually short lived, and the DIs were usually careful not to inflict any blows that would result in permanent damage or that damage that would be clearly visible (for example, a black eye).
The other alternative would be to “Request Mast.” Request Mast meant we would be allowed to complain to a DI’s superior, the Lieutenant I mentioned before for instance, but without a witness, I felt such an action would be futile. I did hear of cases where a DI would be demoted for striking a recruit, but those cases were rare.
One of the more unique types of harassment inflicted on the platoon was the time we had to perform the Manual of Arms with our footlockers. We were ordered to fall out on the street with our foot lockers. When we were all in the position of attention with our foot lockers in front of us, the DI gave the order.
“Right shoulder arms.”
Since the required move was one you did with a rifle, I was confused how to start. Nevertheless, we all managed to clumsily maneuver the foot lockers through the entire series of commands the DI shouted.