Sign UpLogin
You are here: Home / Books / Go Forward Into the Storm – An Iwo Jima Journal

Go Forward Into the Storm – An Iwo Jima Journal 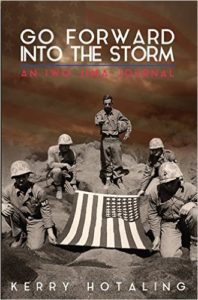 Reverend Gage Hotaling was a young minister when America was drawn into World War II. As the war dragged on, he felt the need to enlist, so he could successfully preach to this generation. He joined the Navy in 1944, only to end up assigned to the Marines. His first action was on Iwo Jima, the bloodiest battle for the Marine Corps during the war. This book tells of his experiences on the island, along with his formative years in seminary and his early ministry. He was a selfless man who spent his life serving God, never seeking fame or recognition. Fifty-five years after the battle, he was bestowed with a most fitting tribute.